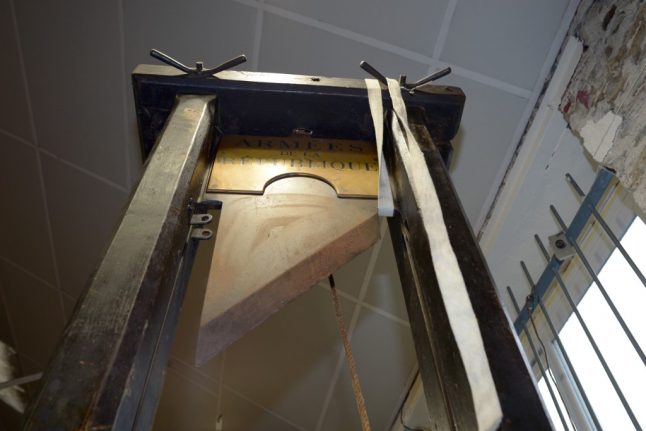 The guillotine was the official means of capital punishment in France until 1977. Photo: AFP

France's highest constitutional court began examining a complaint on Tuesday from a man seeking a change in the law to allow a pardon for is father who was executed in 1957 for killing a policeman in an armed robbery.

France abolished capital punishment in 1981, but the country's law prohibits legal rehabilitation of convicts who were put to death.

Gerard Fesch approached the Constitutional Council for a change in the law so that his father, Jacques Fesch, could be posthumously reprieved.

Jacques Fesch was sentenced to death in 1957 and executed on October 1st of that year, aged 27.

During his six months on death row he turned to religion in a dramatic repentance that senior French Catholics today deem worthy of beatification.

His son Gerard never knew his father. He was given up by his mother shortly after he was born and grew up in foster care.

Patrice Spinosi, one of Gerard Fesch's lawyers, said it was “against the constitution” that a person executed could not be considered for rehabilitation when any other condemned criminal had a right to ask.

He said he expected a “strong” and “humane” decision from the court. The Council is to give its ruling on February 28th.

'Engraved in my heart'

The guillotine, a vertical, framed device that carries out executions by beheading, was the official means of capital punishment in France from the French Revolution until the country's last execution in September 1977.

“What I want is that history does not just remember the guillotine but that every person can repent and become better,” Gerard Fesch, 65, told AFP.

Gerard Fesch was 40 when he discovered who his father was, after a friend pointed out striking details in a magazine feature about Jacques Fesch's execution.

“I could have very well stopped there. But I saw that he was interested in my existence,” he said, insisting that his father was “not a hooligan”.

Just before being executed, Jacques Fesch wrote a letter to his “son Gerard” saying: “May he know that even though he could not be my son by law, he is in the flesh and his name is engraved into my heart.”

His paternity was legally recognised in 2007, and the next year Gerard took Fesch as his surname.

The aim is not to “rejudge him” but to find a kind of a pardon and place “another stone in the fight against the death penalty,” said Gerard Fesch.