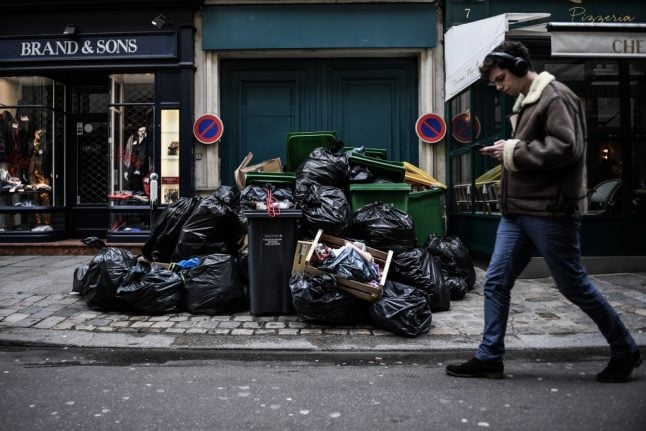 Sidewalks in several parts of Paris have become obstacle courses of overflowing wheelie bins after 10 days of blockades at the city's incineration plants.

According to the hardline CGT union, 60 percent of the workers at the three huge incinerator plants – in  Ivry sur Seine (Val-de-Marne), Issy-les-Moulineaux (Hauts-de-Seine) and Saint-Ouen (Seine-Saint-Denis) – which process most of Paris' waste are on strike.

The majority of the city's waste collectors are not striking, but with the plants partially closed and the ovens turned off, there is nowhere to take the garbage

The workers at the incinerators are among those who would lose 'special regime' pensions allowing them to retire early under plans to reform and simplify the French pension system. They argue that they should continue to be allowed to stop work early because their life expectancy is seven years less than for the average French person.

In a city where public parks have battled rodent infestations in recent years, the trash pile-ups have raised public health concerns.

Pictures of the uncollected waste have been posted on Twitter alongside messages asking the government to intervene.

READ ALSO French government's pension reform bill – what is it all about?

“And what's worrying is to see little rats running into the streets far more easily. It's an open bar!”

April Wood, an American tourist who was visiting the sights in Paris's Left Bank with her husband Andy, also expressed disgust.

“I think it is a deterrent as a tourist to have to witness it,” she said.

In the southern port city of Marseille, where workers have been blocking waste-sorting centres for the past 10 days, some 3,000 tonnes of garbage have piled up in the streets, according to local authorities.

The city has required unions to provide a minimum level of service and placed garbage tips out for residents to stop them dumping their trash directly on the street.

Tthe government's plans to fuse 42 different pension schemes – including the early retirement plans enjoyed by train drivers, Paris Opera employees and several other groups – into a single points-based system was the spark for mass transportation strikes that began on December 5th and paralysed public transport for many weeks.

Train drivers last month suspended their strike after 47 straight days of disruptions to the Paris metro and inter-city trains that caused travel misery for millions.

President Emmanuel Macron's government argues that its reforms are necessary to make the pension system, one of the most generous in Europe, fairer for all and more sustainable.

Critics say it will force most French people to work longer for reduced payouts.

Currently the government and unions are undertaking three months of talks to try and come up with an alternative to a 'pivot age' proposal that would force French people to work until the age of 64 in order to get a full pension. Prime Minister Edouard Philippe says he is willing to scrap the pan – but only if unions can come up with a way to balance the books without it.