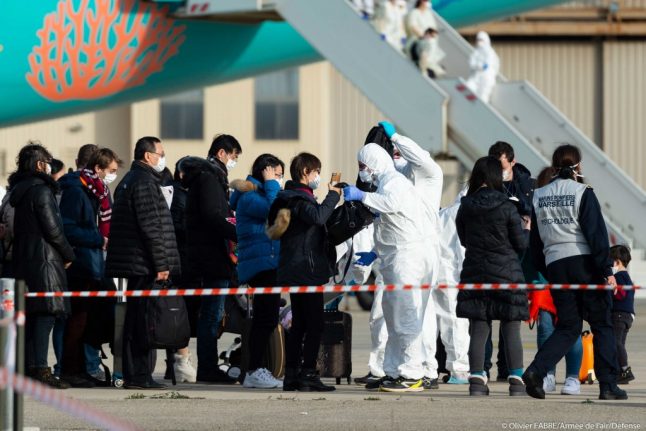 Sixteen of the those people were flown on to their respective countries of origin but 20 stayed in France and underwent further testing.

Those 20 tests have all come back negative, French health authorities confirmed on Monday morning.

The 20 will now join fellow passengers along with passengers on an earlier evacuation flight at a quarantine centre in the south of France.

“All these tests were negative and so all these persons were able to go to the (two) centres” in the south of France where they will remain in quarantine for 14 days, junior health minister Adrien Taquet told BFMTV Monday.

In all, 254 people arrived in France from the Chinese city of Wuhan, where the deadly virus was first detected, on the second such flight.

The second evacuation flight was carrying people of 30 different nationalities, most of them European. Sixty five of the returnees were French.

A total of 124 non-French evacuees swiftly travelled on to their home countries, according to military sources in Istres.

Nine Belgians and three of their partners as well as 15 Dutch citizens and their two Chinese partners were isolated after travelling on from Istres to a military airport near Brussels, according to Belga news agency.

However, 60 others from Mexico, Rwanda, Brazil and Georgia remained on French soil, Buzyn told reporters.

Some of the returnees will be quarantined for 14 days while others would be allowed to head back to their home countries if they showed no symptoms of the virus, Foreign Minister Jean-Yves Le Drian told French broadcaster RTL.

The first planeload of evacuees from China arrived on Friday and are in quarantine at a resort on the Mediterranean coast.

READ ALSO How to survive a coronavirus quarantine, French style

Two passengers from that flight were identified as possible cases of coronavirus, but tests on them came back negative.

Le Drian hailed the “remarkable” cooperation by the Chinese authorities which has allowed all the French nationals who wanted to return home to do so.

The health minister assured that the arrival of more people from Wuhan presented no extra risk of contagion of the virus.

France and its fellow G7 countries will discuss a joint response to the coronavirus epidemic, Germany's health minister said on Sunday.

So far in France, only six cases of coronavirus have been detected – five people who had recently travelled from China and one French medic who had been treating a virus sufferer.

The worldwide death toll has now topped 300, but the majority of the deaths so far have been in China.