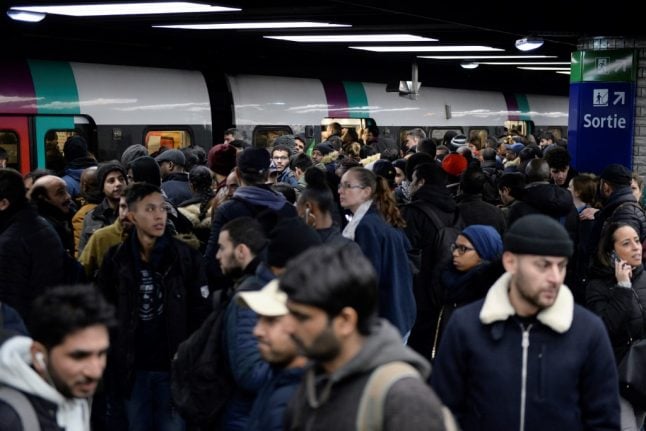 Commuters in Paris who purchased the Metro pass known as Navigo can get a reimbursement for December after still ongoing transport strikes heavily disrupted services all month. Photo: AFP

An official, temporary refund site for Navigo pass expenses that went live on Thursday was inaccessible on Friday morning.

Ile-de-France Mobilités (IDFM) said earlier this year that everyone who had bought Navigo passes (Paris season ticket travel cards) in December would be able to claim a reimbursement of their costs because of the mass-disruption caused by the strikes that month.

Just hours later, anyone trying to access got the following message: “The site is temporarily inaccessible due to a large number of simultaneous connections,” a representative at Ile-de-France mobilités told the French media Ici on Friday, two hours after the site opened.

Anyone who bought either a monthly Navigo pass for December 2019, or who had an annual pass last year. Special passes like Solidarité, Imagine R and Navigo senior are also included in the plan.

Single tickets and short-term subscriptions are however not reimbursable.

Good news. You just need to enter your name, date of birth and your Navigo pass number. In some of the special offers (like Navigo Découverte) your home address and a picture of your passport could be required.

How long do I have?

You need to send in your request in the next six weeks (before March 12th). The site will stay open after that date, but it will no longer receive applications, only go through the ones already sent in.

BUT, stay clear of fake sites

There have however been trouble with fraudulent sites pretending to give out reimbursement, but really stealing personal information from those who filled out the forms.

“We remind you that the single service that will be put in place can be found at the address mondedommagementnavigo.com, which will be made available by the end of January.”

One of the sites in question advertised its services as “0 irritation, 100 percent time saving,” reported French media, and promised to reimburse customers three times more quickly than the official site would.

To get their reimbursement, some of the fraudulent sites asked users to provide information such as their bank details (RIB) or a receipt of their purchased December pass, according to RTL. Obtaining these details would allow the scammers to misuse personal information.