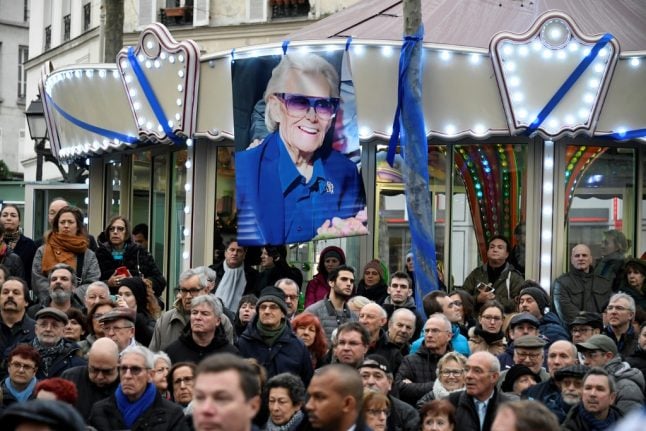 Mourners clapped the nightclub owner, who always dressed in blue beneath a bouffant snow-white coiff, as his cask was carried into an Art Nouveau church in Montmartre, the picturesque neighbourhood of the French capital where Michou was both “king and queen”. Michou pictured in 2016 in his all-blue wardrobe. Photo: AFP

Hundreds of celebrities and fans including French first lady Brigitte Macron, former prime minister Alain Juppe and Michou's performers – who always called him “Mummy” – crowded into the chapel for the ceremony.

Many wore blue as a tribute to the man who kept alive a rakish, bohemian spirit in the district, once the haunt of artists like Picasso and Toulouse-Lautrec. Even the hearse was the same shade of electric blue as Michou's famous suits, with the “Republic of Montmartre” band marching it from the church.

Brigitte Macron had visited Michou only days before he died aged 88 last week. After his passing, the Elysee Palace issued a long lament saying “the sky above Montmartre will be a little less blue from now on”.

Blue flags also hung from the windows of apartments near the church and portraits of Michou were attached to railings and a nearby children's merry-go-round. Michou had welcomed nighthawks, neighbours and Hollywood stars into his tiny dinner cabaret, which has stayed open every night since 1956.

A champagne glass always in hand, his quick wit and sunny disposition endeared him to generations of French people. “I am lucky to be such a famous and loved gay,” said the man born Michel Georges Alfred Catty.

And indeed, his final resting place in a tiny graveyard near the Sacre Coeur basilica in Montmartre, has a fine view of Paris.

In his memoirs, published three years ago, Michou said that he wanted “the cabaret to disappear with me”.

“It might seem pretentious, but the club will not survive me,” he wrote.