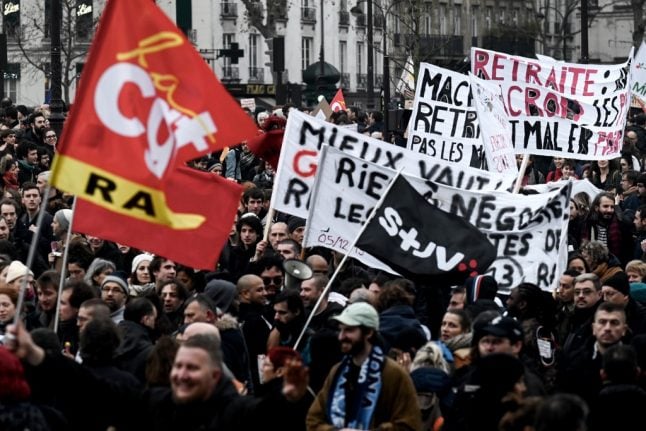 The talks were called after Prime Minister Edouard Philippe dropped his plan to balance the budget by pushing back the age for a full pension to 64 from 62, in a new “universal” pension system that does away with dozens of separate regimes.

But he says that if he agrees to union demands to drop the 'pivot age' of 64, the extra money will have to come from somewhere else.

READ ALSO French government unveils pension reform bill – so what is in it? He has therefore set a three-month deadline for finding the money, or else he will impose the so-called “pivot age” that would cut payouts for people who retire before 64, while boosting them for those who work longer.

However, Philippe has already ruled out making employers contribute more to the system, saying that would make labour more expensive and crimp hiring.

“But if our social partners can agree on a cocktail of measures, including something different that the pivot age, I'll take it,” he said.

The government estimates the pay-as-you-go system will be running annual deficits of €12 billion by 2027, because fewer workers will be paying for increasing numbers of retirees who are living longer.

The overhaul was a key plank in Emmanuel Macron's presidential election campaign, which promised a series of reforms to revitalise French economic growth while reining in government spending.

He says the new system, in which workers will earn points based on earnings that can be converted into pension payouts, will be more transparent and fairer, especially for women and low earners.

France currently has 42 legacy systems, many offering early retirement and other benefits to public-sector workers like train and Metro drivers, which critics say are no longer justified.

But unions accuse Macron of plotting a system that will effectively force millions of people to work longer or accept lower pensions – or to sign up for private, US-style investment accounts.

On December 5th, they launched a massive transport strike that wreaked havoc on millions of commuters and travellers, punctuated by several days of mass protests that saw teachers, hospital workers and other public workers hit the streets.

Yet the protests have largely ended after Philippe dropped his pivot age – at least temporarily – and invited union leaders to submit alternatives.

Although some unions are technically continuing their actions, almost all their members have gone back to work and transport services both in Paris and around France have been running normally for the last few days.

The most recent 'day of protest' called by unions on Wednesday saw a low turnout on protest marches and very little disruption on Paris public transport and on the national SNCF rail system.

“We have a very simple proposal… increasing employer contributions by one percent would balance the budget by 2030,” Yves Veyrier of the hard-line Force Ouvriere union told RTL radio on Thursday.

And even though the financing is still in flux, the government aims to push the overhaul through parliament quickly, with a first vote expected in early March.