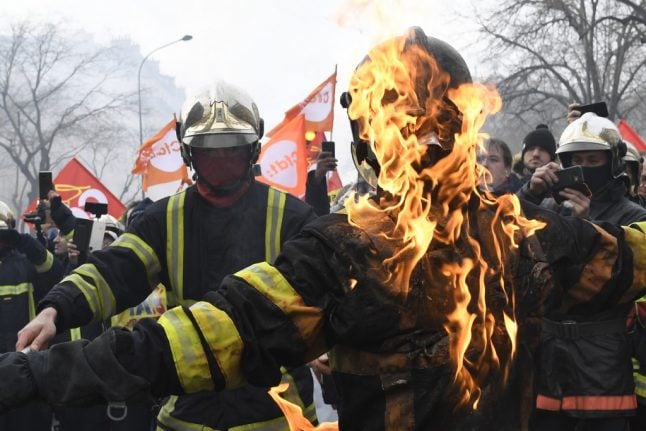 Thousands of French firefighters took to the streets of Paris on Tuesday, igniting flares and even setting their protective jackets alight to to demand better working conditions.

Videos posted on Twitter showed police and firefighters clash in violent fistfights during a protest over pension reform and working conditions.

Dressed in sporting helmets and protective gear, the firefighters – who had travelled to the capital from outside Paris – marched from Republic Square to Nation Square, climbing onto the city's statues.

Some of the firefighters threw projectiles and police retorted with tear gas.

Some protesters blocked the main ring road of Paris but were dispersed, Paris police said on Twitter. Two people were arrested.

The firefighters, who in France also respond to general emergency calls, were protesting against what they said were ever-worsening working conditions and limited resources.

“We are the final link in the chain of emergency aid in France and we are overwhelmed by call-outs,” said Frederic Perrin, head of the SPASDIS-CFTC union.

Among their demands were that staff levels be maintained and that they get to preserve their existing pension system.

They also asked that their salary premium for risk taking in the job be brought in line with that of the police.

“We need the staffing and means to respond to this and also a guarantee that we can concentrate on our core missions, emergency response, and not serve as a supplement to absent health services,” Perrin told AFP.

Firefighters in #Paris set themselves on fire in protest against their working conditions #greve28janvier #France #Macron #pompiers pic.twitter.com/U29415pBi2

Unions representing the firefighters later called off the movement after what they said was a satisfactory response from the French government, which included an increase of their salary premium for risk taking.

Firefighters had been staging protests more for than six months over their pay and working conditions. Like other emergency services in France, they are banned from actually striking, but had staged a series of demonstrations.

The mass strike action on Paris public transport and the railways have now fizzled out and transport is generally running as normal but the hardline unions have vowed not to give in.