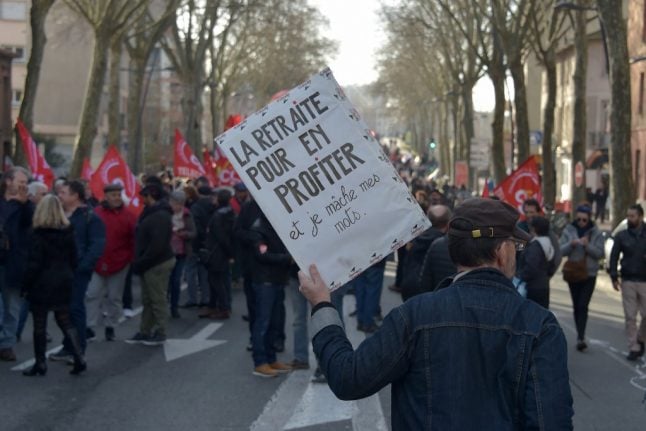 The first 'national day of protest' against pension reform on December 5th saw hundreds of thousands of people take to the streets and transport services across France come to a virtual standstill.

Now nearly two months later protest days are still being declared by some unions, but their effect has tailed off dramatically.

The trade unions CGT, FO, FSU, Solidaires, FIDL, MNL, UNL and UNEF are calling for Wednesday, January 29th, to be a “massive day of strikes and inter-professional and inter-generational demonstrations.”

They are also calling for the protests to continue into Thursday and Friday with torch-lit parades, general assemblies and one-off pickets.
So what's actually happening?
Transport services on Wednesday are described as either normal or 'quasi normal'.
Some Metro lines – lines 5, 6 and 8 – are running slightly fewer trains than normal and there are also fewer services than normal on some of the RER suburban train lines.
No lines are closed and everything is running all day – so compared to the disruption that we saw in the first weeks of the strike, it's pretty minimal.
Some Metro stations are closed in the afternoon from 2pm, by order of the police, due to planned demonstrations. They are Champs-Elysées-Clemenceau, Varenne, Invalides and Miromesnil.
It's the same story on the nationwide SNCF train lines, where no significant disruption is recorded.
There is a demonstration planned for Paris for Wednesday afternoon.
Turnout on the weekly marches has fallen sharply since the beginning of the strike and recent marches have numbered a few thousand.
In general the marches themselves have been peaceful, but masked black-clad hooligans have turned up at the end of several previous marches and begun smashing street furniture and setting things alight. When that happens the police usually respond with tear gas, so people may want to steer clear of the march route.
The demonstration begins at 1.30pm a Place d'Italie before moving west through the city centre to end up at Invalides. Map: Google maps
Around France there are some other protests, including marches in Toulouse and in the southern town of Périgord, where marchers numbered about 800.
So does this tailing off of disruption mean the strike movement is over?
Well not entirely, the main union on the Paris Metro – Unsa – has officially called off its unlimited strike but other unions have not, although the numbers of their members still striking are so low as to cause no significant disruption.
Some unions such as the hardline CGT have moved on to 'geurrilla' actions such as blockading ports and cutting power supplies.
Here our columnist John Lichfield looks ahead to the likely actions over the next few weeks.
The central cause of the dispute – the government's proposed reforms to the pension system – is now moving through the parliamentary process and is expected to be before the Assemblée nationale in early February, albeit with quite a few caveats and exceptions added in an attempt to placate some of the more moderate unions.