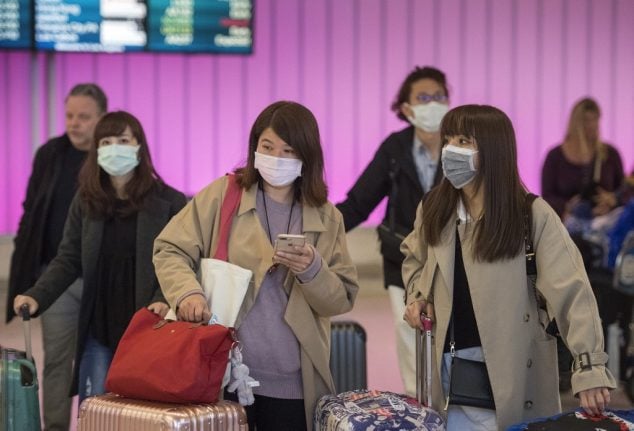 France on Friday became the first country in Europe to report confirmed cases of the deadly coronavirus, which was first reported in China in mid December

Since then more than 100 people have died and thousands have been infected in countries across the world.

On Monday evening Germany confirmed that it too has a case.

Why are airports important?

The Chinese city where the virus was first reported – Wuhan – is an international transport hub, so health officials always feared that the illness would rapidly spread around the globe.

This has now proved true, with cases recorded in Japan, Nepal, Singapore, South Korea, Taiwan, Thailand, Vietnam, the USA, Canada and Australia, as well as France and Germany.

In France, health officials have confirmed that all three patients – two in Paris and one in Bordeaux – had recently travelled from China by plane.

So are flights from infected areas being grounded?

No. This would be a tricky one for France to pull off alone, as many people who travel to France from China do so via other countries, particularly Brussels and Barcelona, so for it to be effective any flight ban would have to be an international effort.

Although China still has the largest number of reported cases by a long stretch, there is also the consideration that with the virus now reported in many other countries, simply banning flights from China may prove pointless.

So are there health controls at French airports?

Paris' Charles de Gaulle airport, the country's biggest international transit hub, had a medical team put in place on Sunday to deal with anyone who arrives at the airport with symptoms of the illness.

Anyone landing at a French airport from China is given written information on the illness, its symptoms and what to do if they are ill.

What is not happening is temperature screening.

French health minister Agnès Buzyn has described this as “a symbol, a false security” and says it does not help to detect the illness, adding that the World Health Organisation does not recommend temperature screening.

The two Paris patients – who are a couple – arrived in France on January 18th with no symptoms, so temperature screening would not have helped detect their case.

Is all this enough?

The virus is new so no-one quite knows exactly what course it will take, and health officials are certainly taking it seriously as a risk.

So far more than 100 deaths have been reported and Chinese officials say that the majority of those were elderly people or people with underlying health conditions – although a doctor who was treating the patients is also among the dead.

The numbers sound scary, but it is worth pointing out that normal seasonal flu killed 9,500 people in France last year.

What about bringing people back to France?

The French government has agreed to repatriate its citizens in Wuhan – many of whom work for car maker PSA.

There will be at least two flights, the first arriving in Wuhan on Thursday. The first flight is for people with no symptoms, a later trip will be for people who may be ill.

The French government has already reserved a housing facility for those returning where they will have to stay for 14 days, the estimated virus incubation period, to ensure they are not infected.