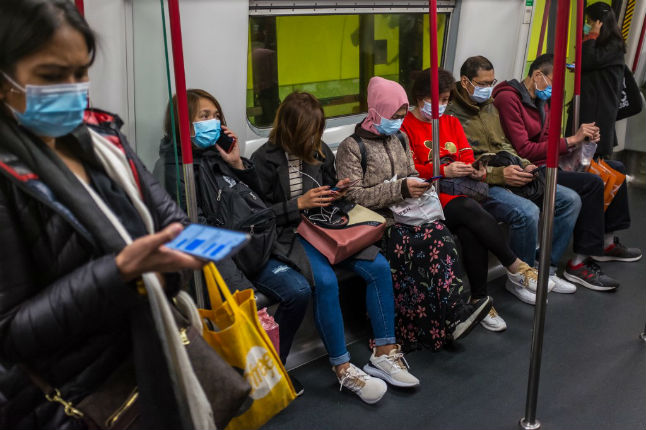 Commuters wear face masks on public transport in Wuhan on the second day of the Chinese Year of the Rat. Photo: Dale de la REY/AFP
Three cases of the virus have been confirmed in France while Chinese authorities have said the death toll there has risen to 41 with around 1,300 infected.
The French firm, which makes brands including Peugeot and Citroen, said in a statement the evacuation was being “implemented in full cooperation with the Chinese authorities and French consulate general” and involved 38 people made up of staff members and their families working in the Wuhan region.
They would be quarantined in the city of Changsha, around 300 kilometres (180 miles) from Wuhan where the virus originated, before being allowed to return “to their countries of origin”, the company said in a statement.
The first cases to be confirmed in Europe were announced by French Health Minister Agnes Buzyn on Friday.
Others were “being monitored”, said Paris emergency service chief Pierre Cali, without giving an exact figure.
“We are going to have patients suspected of having the virus, there are going to be (more) cases,” warned Yazdan Yazdanpanah, head of infectious diseases at Paris's Bichat hospital where two of the three cases were being treated.
Yazdanpanah said they were a couple from Wuhan, a man aged 31 and a woman aged 30, who arrived in France on January 18 as part of a trip.
The other case involved a 48-year-old man, originally from China, who returned to France on January 22 after having “passed through Wuhan”, according to Buzyn.
He has been in hospital in the southwestern French city since Thursday after contacting doctors with a high temperature and a cough.
“Ten to 15 people” who had been in contact with him had come forward, Bordeaux mayor Nicolas Florian said, adding that Chinese New Year festivities planned for Sunday had been cancelled by organisers “as a precaution”.
An in-depth investigation into the three cases was launched which identified all those who had had close contact with the three patients to ensure that they were properly monitored to prevent the spread of the virus, French health ministry officials said.
All three were currently “very well”, France's director-general of health Jerome Solomon said.
“We are all reassured by their progress,” he added.
A medical team several dozen strong would be put in place at Paris's Charles de Gaulle airport from Sunday, health authorities added on Saturday.
The new virus has now infected people across China and in nearly a dozen other countries.
China's most important celebration, the New Year festivities, has been all but cancelled for at least 56 million people as authorities expanded travel bans.
The world's most populous country has scrambled to try to contain the disease, building a second field hospital in Wuhan to relieve overwhelmed medical facilities and closing more travel routes as the country marked the Lunar New Year holiday.
A seafood and live animal market in Wuhan has been identified as the centre of the outbreak.