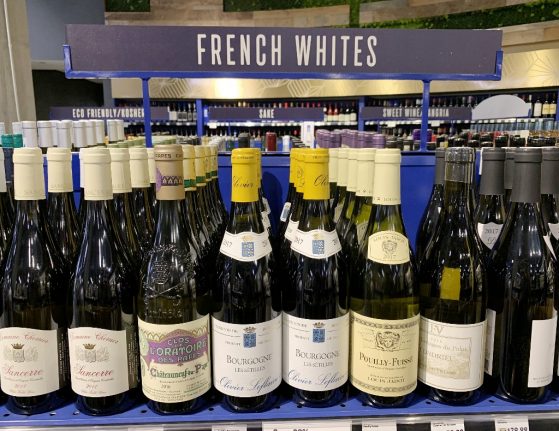 How bloody much?? The price of wine may come as a shock when leaving France. Photo: AFP
Whether it's just a brief trip to visit relatives or a more long term move, it can still be a culture shock heading home. Here are some of things that the British residents in France can get a little too used to.
1. Formal greetings
You will say bonjour/bonsoir a lot in France, but the opportunities to say good morning are rather more limited in the UK.
It's not regarded as necessary and will often make you appear stiff and overly formal. Starting any kind of casual exchange (paying for items in a shop, picking up a parcel from the post office etc) without a bonjour is regarded as rude in France, whereas in Anglophone countries it's perfectly normal to just launch straight into your business.
And greeting everyone in the lift or the doctor's waiting room with a cheery 'hello' is likely to get you some very odd looks. Stick to the traditional British greeting of awkwardly avoiding eye contact.
READ ALSO The French culture shocks you should be prepared for Haute cusine, British style. Photo: AFP
2. The food
Remember when you first came to France and you went into raptures over the taste of a tomato, chicken, a fresh fig or a still-warm baguette? Well after a while you got used to them and now you think that's normal, so your palate could be due a rude awakening.
A few organic or locally-grown exceptions aside (as well as proper pies and fish and chips), yours likely to find food in the UK tasteless, rubbery and drowning in additives. You'll also notice people eating all over the place – on the train, at the bus stop, in shops – which may come as a surprise after France's rather stricter snacking culture.
READ ALSO How to snack (or not) like a French person
3. The spice
But there is one aspect of British food that many France dwellers miss – spices.
Getting a good curry is difficult to impossible in many parts of France, so returning home to a spice hit can be great. Although once you've been away long enough you may find that you tastebuds are a little more delicate than they once were. Go easy on the rogan josh. You may need to put in some training before you can keep up with British drinkers. Photo: AFP
4. The drunks
It's a bit of a myth that the French are all moderate drinkers, any big city on a Friday or Saturday night will have its share of over-refreshed French youths, and there's even a Facebook page dedicated to headlines from local French media about drunken exploits.
But that said, the average British high street on a Friday night can still come as a bit of a shock after you've been away. As can the traditional slicks of vomit along the streets the following morning.
You won't find many people enjoying something to eat on a night out either. While for the French food is central to a nice evening out, in many parts of the UK the mantra 'eating is cheating' still holds true.
5. The price of wine
Not that we're averse to a drink, especially a nice glass of wine.
But after several years of enjoying drinkable local vins de table for under a fiver, the money you have to spend to get a halfway decent bottle of wine in Britain can make you wince.
READ ALSO Eight tips on buying wine in a French supermarket
6. The noisy kids
Contrary to what the books claim, French children do throw food. And temper tantrums.
But going to restaurants as a family is far more common in France and most times you won't even realise there are children in the establishment until you pass them on the way out. British parents, on the whole, seem to take a rather more laissez faire attitude to sitting up nicely at the table, meaning you are a lot more likely to be aware of little Johnny's presence in the restaurant or café where you are eating.
7. The noise in general
But don't blame the kids, they get it from their parents.
British people in general are noisier than the French, especially when we get together in a pub, when the noise levels can be really quite something.
READ ALSO The pros and cons of raising children in France Be prepared for some rage if you drive in France. Arena Creative/Depositphotos
8. Drivers
In a shocking development, drivers in the UK may give way and allow you to pull in from a side street. They may also thank you with a gracious wave if you do the same for them, while the horn is generally only used in emergencies (which not include waiting for a fraction of a millisecond before driving off once the traffic lights turn green).
This can be discombobulating after a few years of driving in France – particularly Paris.
Oh, and those flashing lights on the side of cars? They're called indicators and are quite widely used in the UK.
READ ALSO Aggressive, thoughtless, arrogant – this is how bad French drivers really are
9. All the work
At first you'll find it very handy to be able to do your errands with no lunchtime closures or Sundays off. But if you head back to the UK to work you will soon be appalled by how many weeks you've been working with no bank holidays in sight.
And there's probably little chance you will get to go on strike, either. It's frankly exhausting.
This article was written by a Brit so only refers to the UK, but what do our readers of other nationalities find is a shock when they go home? Is it the portion sizes in the US, the odd phrases in Canadian French or the different manners in India? Send your experiences to [email protected]