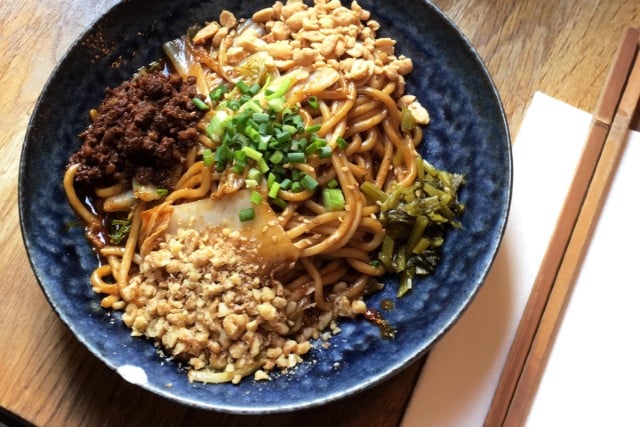 From street food to restaurants, there are some great options in Paris. All photos: Diana Liu

After trying more than 100 restaurants in my five years in Paris, I’m revealing my top five picks for the best East Asian food in the city. This unassuming Korean restaurant in the 15th arrondissement that’s usually booked full by locals was one of the first restaurants I tried after moving to Paris.

The fact that the establishment has remained in my top five is a testament to the quality of the dishes served, whether it’s the crowd-pleasing beef bibimbap in a sizzling stone pot or the flavourful sundubu-jjigae, a tofu stew deeply infused with spices and stuffed with pickled vegetables and meat.

Digging into their tteokbokki, a spicy rice cake dish that you can top with ramen, amidst the background of melodious K-pop and Korean chatter, brings me right back to the streets of Seoul. Housed in a narrow yet stylish two-storey space near Chatêlet, Trois Fois plus de Piment serves up the city’s most famous Sichuanese noodles and dumplings expertly seasoned with the Chinese region’s famous pepper.

Literally translated as 'three times more spicy', the name may scare those with a sensitive palate. However, the restaurant adapts its spice level to all tastes on a scale of 0-5. My winning combination is an order of their plump dumplings tossed in Sichuanese sauce (level 1), followed by a bowl of their DanDan noodles (without soup) or their Nouilles sèches, topped with minced pork and a sauce infused with the trifecta of Chinese cuisine: scallion, ginger, and garlic. This trendy restaurant near Réaumur Sébastopol serves sushi with a Californian twist – maki rolls featuring innovative pairings like scallop tartare and aioli (one of my favorites) and chirashi bowls with an elegant and colourful assortment of fresh sashimi.

For those who don’t eat raw fish, they’re also known for their signature grands bols – a bowl of warm rice topped with fried tempura vegetables plus a savoury protein that ranges from chicken katsu to roast pig barbecued Hawaiian-style. If I’m feeling really gourmand, I’ll order one of their grands bols and pair it with a maki roll and a slice of their creamy green tea cheesecake for dessert. Standing out from its neighbours with its street-art-splattered storefront beside the Canal Saint Martin, Street Bangkok Local Food serves up Thai cuisine’s aromatic and complex flavours in an electric atmosphere.

The cold section of their menu features their refreshing, sweet-and-spicy papaya salad – a meal onto itself when served with glutinous rice as per Thai custom. In the hot section, you’ll find the restaurant’s succulent chicken satay as well as a variety of comforting curry dishes featuring lamb, salmon, and other meats (they can also be prepared vegetarian). It’s my go-to whenever I crave vibrant dishes that are refreshing, yet rich and brimming with flavour. Le Goût de Taïwan, situated on a calm street near Saint-Michel, is the portal between Paris and the homemade Taiwanese fare of my childhood.

Featuring traditional comfort-food dishes like lu rou fan (braised pork rice), the simple yet savoury three cup chicken, sautéed udon noodles with shrimp and assorted vegetables, and even xiaolongbao, delicate dumplings filled with a rich pork broth, everything is perfectly seasoned and beautifully presented in dishes in the shape of the island.

Don’t leave without trying their homemade desserts, Taiwanese specialities such as pineapple cake and black sesame dumplings. To be transported into a Taiwanese kitchen, all you need is a Metro ticket.

Diana Liu is co-creator of ChopChicks in Paris, a blog that details the diverse Asian food offering in Paris.