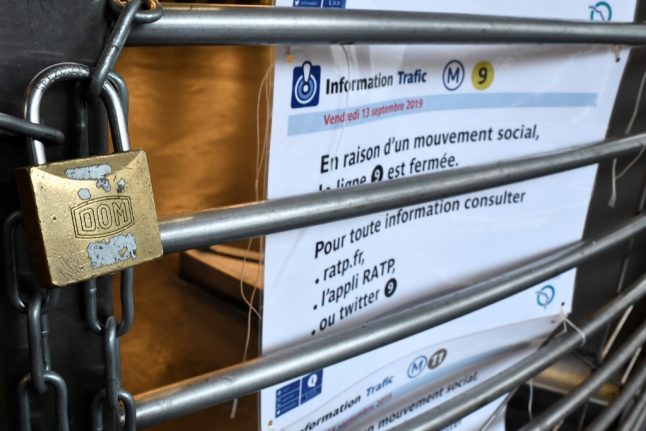 Two of the biggest French unions have threatened to “completely block” transport on Friday.

What? I thought the strikes were over?

Well not entirely although transport both in Paris and on the railways has been running at very nearly normal levels this week. This has been due to a combination of factors. Last Saturday Unsa – the biggest union among Paris Metro drivers – announced that it was suspending the indefinite strike that had been running since December 5th.

At the same time, services both in the capital and on the railways had been steadily improving. French workers are not paid during strikes and after seven weeks of industrial action many could no longer bear the financial pressure and returned to work.

This enabled transport operators SNCF and RATP to operate services that were virtually at the normal level.

But despite this, unions other than Unsa were still officially on strike.

Friday has been declared a 'day of action' with unions including Unsa and Solidaire calling on their workers to stage a one-day walkout. When Unsa announced that they were ending their indefinite strike action, they said it was to concentrate on 'other activities' – this would seem to be what they meant.

Solidaire announced: “We are preparing for a black day. No Metro, bus or RER, stations closed.”

So has transport stopped running again?

Things are nowhere near as bad as they were during the early days of the strike, when 11 of Paris' 16 Metro lines were closed altogether and only 10 percent of the trains were running. So what is running?

Lines 1 and 14 – which are automated – are running as normal as they have throughout the strike.

Line 2 : Half normal trains during rush hour (6.30am to 9.30am and 4.30m to 7.30pm) and one train in three the rest of the day. Pigalle, Barbès-Rochechouart and Jaurès stations are closed.

Line 3 : Rush hour services only, one train in five

Line 4 : From 6.30am to 7.30pm half normal trains during rush hour, one in three for the rest of the day. Oberkampf, Jaurès and Gare de l'Est stations closed.

Ligne 8 : One train in three during rush hour, one in four the rest of the day

Ligne 12 : From 6.30am to 10.30am and 3.30pm to 9.30pm, half normal trains. Marcadet-Poissonniers, Pigalle and Montparnasse-Bienvenue stations closed

Ligne 13 : From 5.30am to 8pm, one train in four. No trains on the Asnières-Gennevilliers to Les Courtilles section. Montparnasse-Bienvenue station closed

Because demonstrations are planned, some stations are also closed by order of the police.

They are; Champs-Elysées-Clemenceau, Franklin D. Roosevelt, George V, Charles de Gaulle-Etoile, Argentine, Palais Royale, Concord, Solferino, Assemblée Nationale. This can change throughout the day though, so get the latest here.

On the trams services are largely normal apart from line 3b which has fewer services than normal and is not running between 11am and 3.30pm. Three quarters of the quarters of the normal bus routes are running.

On the RER suburban train network all services are running all day, but all apart from Line U have fewer trains than normal.

Friday is the day when the government's pension reform bill is formally presented to the Council of Ministers.

This is the proposed change to the pension system that the protests have been all about. The government has made some concessions to the demands of the strikers – including making more exceptions for early retirement for people in strenuous professions and delaying the implementation of the changes – but has stuck to its timetable for the bill.

This means the bill will be presented to ministers on Friday and debated by the French parliament in early February.

Anything else going on?

Yes, there is another demonstration planned by the group of eight unions who remain most vociferously opposed to the pension reform. There have been regular 'protest days' throughout the strike and although they saw a massive turnout on the first day on December 5th, numbers have dropped sharply in recent weeks.

Although the marches themselves have been largely peaceful, small groups of black-clad hooligans starting fires and smashing bus stops seem to have become a regular feature at the end of the demonstrations.

These have often lead to scuffles with police in which tear gas has been used, so it might to wise to avoid the route of the march (see map below).

The demonstration begins at 11am in République before moving west through the city centre to Concorde. Some teachers are also taking strike action so some schools – mainly in Paris – are closed for the day and the Eiffel Tower is also closed all day.

Outside Paris there is some disruption on  the railways, although again nothing like as bad as the services at the start of the strike.

Overall 70 percent of trains are running, but services on the high speed TGV routes, the budget Ouigo services and the Eurostar are all normal.