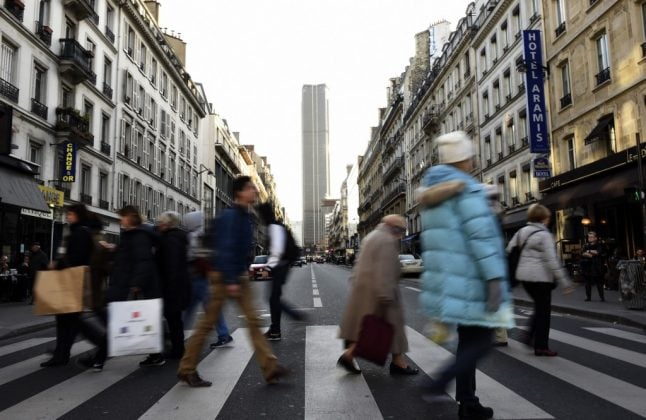 Pedestrian crossing rules seem to be a challenge for many drivers in Paris. Photo: AFP

Those figures will probably not come as a surprise to anyone who spends a fair amount of time walking in the capital, where it often seems that stepping out on to a pedestrian crossing is the beginning of a game of chicken. Drivers must give way to pedestrians already on the crossing. Photo: AFP

And as a pedestrian in Paris it's not just the drivers you need to worry about – cyclists and moped riders are, if anything, worse. And there's no escape on the pavements (or sidewalks as our North American readers would say) either where you're just as likely to be forced to leap out of the way of an electric scooter or bike.

Riding scooters, bikes or mopeds on the pavements is illegal, but that message doesn't seem to have filtered through and it pays to have your wits about you at all times.

Then there's the less dangerous but still annoying hazards – vehicles parked any old how all over the pavement, cluttered street furniture and the ubiquitous dog poo.

Dog shit and dodgy parking on a typical school run in Paris. It's a cliché but old habits die hard it seems. We can add cyclists, electric scooters and mopeds to the list of pests for pedestrians in #Paris. pic.twitter.com/21J4W2GANl

In fact a group of Parisians were so annoyed at the behaviour of scooter riders that they have created a Twitter account – Ras le Scoot (fed up of scooters) – for people to post pictures and video of some of the most ridiculous behaviour by scooter and moped riders.

READ ALSO Riding on the pavement, blocking cyclists – the tweets that show why Parisians are fed up with scooter riders

All of which makes walking in Paris something of a challenge even for fit active people – never mind the elderly, disabled, wheelchair users and people pushing buggies.

Which is a shame because it's a beautiful city really best seen on foot, and at a very compact 10km from east to west, the majority of things are within walking distance.

Believe it or not, there are actually quite strict rules for cars and other road users giving way to pedestrians, including

And there is a rule for pedestrians too – it's illegal to jaywalk if there is a crossing less than 50m away. If you're guilty of this you can be fined the princely sum of €4.

But having rules and actually enforcing them is a different thing and although more and more pedestrian crossings are being equipped with cameras so drivers who run a red light can be fined, it's pretty rare to see aggressive cyclists or dodgy drivers pulled over.

She told Le Parisien – as part of the paper's 'Pedestrians at Risk' series: “The place of pedestrians on pavements is under threat, especially with the multiplication of modern machines, such as scooters.

“Even when pedestrians cross the road with the green light, cars pass.

“In large cities, every two or three minutes, there are motorists who risk six points by denying priority to pedestrians.

“We need to launch a vast communication campaign on bad behaviour.
“But we know that this is not enough. We need more controls in the streets, including calling on the municipal police. We can make all the laws in the world, but they will be useless without controls.”
The recent weeks of transport strikes have seen more people getting about on foot, but it seems that frustrated drivers and stressed-out cyclists are getting worse in their behaviour towards pedestrians.
Chantal Perrichin warns that the crackdown needs to happen now before these behaviours become habits.