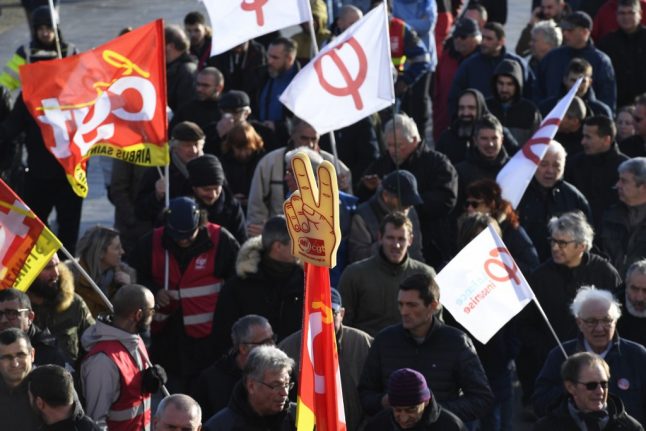 The CGT union has claimed responsibility for the power outage. Photo: AFP

In all France's electricity providers have lodged over 100 formal complaints linked to “malicious” power cuts since the start of the strike movement against pension reform.

But there may be more to come as the more radical of France's trade unions become more militant in their battle against the government.

When asked on BFM TV if he would urge those militant workers who have been cutting power to residents and businesses to stop Martinez said “no”.

Instead he said he would ask the French government to stop “provoking” and “stigmatising” strikers.

The latest in a string of power cuts orchestrated by workers protesting over planned pension reform in France saw thousands of businesses and homes south of Paris have their electricity cut off on Tuesday.

“The goal is to take things up a notch” ahead of the government's formal presentation of the pension reform on Friday, said Sebastien Menesplier, secretary general of the hardline CGT union's energy branch.

French officials have denounced the cuts which have affected thousands of homes across France since mid-December, warning that they could have dangerous consequences for ordinary citizens.

Grid operator Enedis said Tuesday's outages were reported at around 6am and affected several suburbs south of the capital as well as Orly airport and the sprawling food and produce market at Rungis, a key source for retailers and restaurants.

Technicians were able to restore power after two hours, and Enedis said it would file suit for the “malicious acts.”

“We take responsibility for the cuts and their consequences, including any complaints by Enedis management,” Menesplier said.

His union also says it is blocking seven of the 11 equipment warehouses used by Enedis and natural gas network operator GRDF, preventing them from dispatching material to work sites.

The CGT has also warned it could begin limiting output at nuclear power plants and other sites as part of its efforts to force the government to abandon the pensions overhaul.

The union has claimed responsibility for a series of power cuts around France in late December and early January. Thousands of homes and businesses in Lyon, Bordeaux and Perpignan were cut off, and several rugby games had to be temporarily halted after power was cut to stadiums.

The CGT is the most hardline of the French unions and has vowed it will not cease its actions until the government entirely withdraws plans to merge France's 42 pension regimes into a single universal system. Its members have also been involved in blockading ports and oil refineries in an attempt to disrupt the country's infrastructure.

But mass transport strikes that crippled the rail and Paris public transport networks from December 5th are now largely over as workers go back and some unions – including Unsa, the biggest on the Paris Metro system, suspend their action.

Transport in Paris on Wednesday is running almost entirely as normal and on the railways almost all services are running as normal.