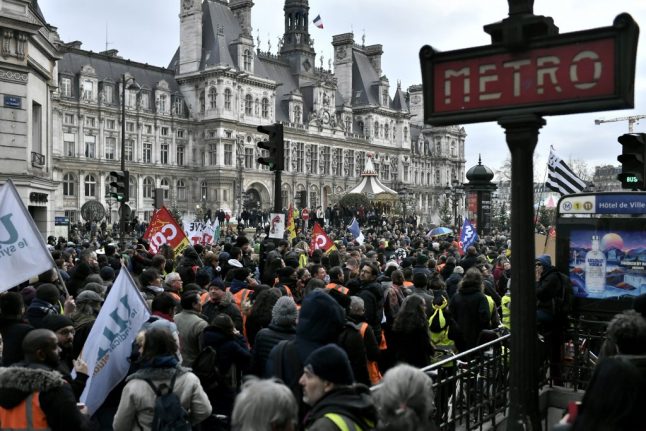 Many businesses – particularly tourist-related ones – have suffered real hardship during the strike as people cancelled trips and stayed away.

And last week France's central bank warned of a hit to economic growth due to the long-running strike action which had affected Paris particularly badly.

Although some unions are continuing with their action, the combination of cash-strapped staff returning to work and Unsa – the biggest union on the Paris public transport network – calling off their strike has lead to the majority of services in the capital now functioning normally.

But among the misery, there have been some unexpected benefits from the strike.

While many Parisians have reported feeling healthier and actually quite enjoying walking or cycling to work instead of taking the Metro, some businesses have reported a boost from the stoppages. “For us taxis it's been good,” 55-year-old Jean-Robert Philippe, an independent driver, told AFP.

He said his daily pickups had been double the usual for a month of December – often quiet for taxis as Parisians leave town for their family holidays.

As train and Metro transport in the capital came to a near standstill for weeks on end, Paris' streets exploded into a cacophony of bells and car horns as pedestrians and cyclists engaged in a mad jostle for space with electric scooters, motorbikes, cars and buses. Transport company Lime reported a 75 percent rise in electric scooter rentals in Paris over the strike period, with as many as 120,000 users on days of mass protest when rail transport was especially disrupted.

There were about 4,000 new Lime users daily on average, it said, with a high of 8,000 first-timers on the first day of the strike.

Cityscoot, which rents out electric versions of the traditional seated scooter or moped, said rentals grew 150 percent in December compared with a year earlier, and new subscriptions rose by 400 percent.

The strike saw taxis, legally prohibited from hiking prices, booked out sometimes days in advance as Uber fares rose in line with demand and rental agencies ran low on cars. Car-pooling to the rescue

Filling part of the void were car-pooling apps such as Karos, which told AFP it had 100,000 new subscribers in December, “which is eight to 10 times as many as a usual (non-strike) month.”

To try and ease commuters' pain, the transport authority of the greater Paris Ile-de-France region increased a subsidy for car-pool drivers, allowing commuters – if they were lucky enough to find an available driver – a free return trip daily within an 80-kilometre limit.

For longer distances, buses tried to fill some of the void left by thousands of cancelled trains.

The Flixbus low-cost carrier said it had provided about a quarter more buses than usual over December to “help hundreds of thousands of people… get around and spend the holidays with their loved ones.”

It transported more than a million passengers in December, nearly double the number a year earlier, the company said. Many have opted simply to walk to work, though the commuting time more than doubled for some.

Yves Benchimol, co-founder of exercise tracker WeWard told AFP that an analysis of 500,000 users of its mobile App in major French cities revealed that “on average, an individual walked 11.3 percent more since the strike started”.

All the better for burning those calories: as the transport chaos marooned workers, leaving many to telecommute, meal delivery company Deliveroo said it took 20 percent more lunch orders in Paris in December — 25 percent including the suburbs.

In one of these, Aulnay-sous-Bois to the capital's northeast, baker Lofti Baushih had few complaints.

Sales tripled on the first day of the strike as locals who normally spend their daylight hours far away in the city took the day off or worked from home, popping in to buy his bread and pastries.

“We worked like crazy,” he said with a happy smile from behind the till.

As Parisians have walked and cycled more, with many potential health benefits, there has also been a boost for pollution-blocking face masks: French manufacturer R-Pur said it had seen a rise of 30 percent in sales.

Another industry helped by the strike was telemedicine.

With doctors and patients both facing transport constraints, startup company Medadom, which created an App for online consultations, said the number of users grew by 50 percent since the strike started, with a record 320 consultations on a single day.

“Patients often indicate that they could not find an available doctor or were unable to get to their doctor as a result of the transport paralysis,” cofounder Nathaniel Bern told AFP.