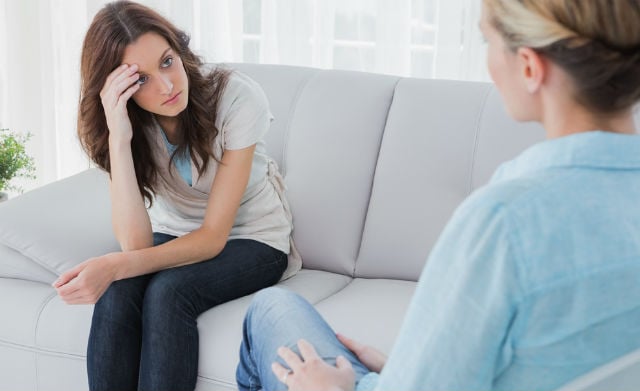 Photo: Deposit photos
If you live in France, chances are you've heard quite a few French people talking about their psy (pronounced psee).
A psy is a collective word that relates to a number of professions: psychologist, psychoanalyst or psychotherapist but not a psychiatrist, who prescribes medicines and is what is referred to in the US as a 'shrink'. In France, seeing one appears to be something that is mentioned in conversation as breezily as popping out to the boulangerie to get croissants for breakfast.
But are the French really more into their psys than their European neighbours, or those across the channel anyway?
Certainly, when conducting an unscientific survey of friends and acquaintances in France, this writer (who's half-French, half-British) found that the majority went to see a psychologist regularly or had consulted one in the past.
A few were also going through long-term psychotherapy or psychoanalysis, one of them 'just for the sake of it'. The same 'survey' with the same number of British counterparts yielded a vastly different response: only one had been, and all the others either hadn't or would not admit to it.
There's nothing scientific about this observation of course. But figures seem to suggest this unofficial 'survey' is onto something.

According to 2015 statistics from the EU, France has 84 psychologists per 100,000 inhabitants which is nearly three times more than the UK which has 32. One third of the French population has been to a psychologist (31 percent in 2017 according to a YouGov poll), and those numbers have been growing steadily in the past few years: in 2001, only 5 percent had ever been.
So what's the story? Are the French just more comfortable talking about their personal problems and seeking professional help or is there something more behind France's love of the psy?
Do you have a question about France or the French you want answering? If so CLICK HERE “There is a very long tradition of psychoanalysis in France. The French, from all walks of life, know some basic psy vocabulary, like the Oedipus complex for example, it's just part of the French culture,” explains Anne Rabary, a clinical psychologist in Paris.
“There is also distinctive cultural heritage in France when it comes to psychoanalysis. Freud had a big impact here of course, but then there was Lacan and Françoise Dolto,” she added.
Jacques Lacan and Françoise Dolto are leading 20th century psychoanalysts. Dolto, a household name, was also a pediatrician, and her books on childrearing are still commonly given to French women when they first have children.
Some experts believe the reason the French are so keen on their psy and psychoanalysis is down to more philosophical and historical reasons.
They point to the 'Cartesian' nature of French culture, so-called after French 17th century philosopher René Descartes (who coined the famous 'I think therefore I am') who believed that mind and body were completely separate, but also the French revolution.
“Perhaps it was the Cartesian mind-body dichotomy, coupled with the irreducible individualism enshrined in the 1789 constitution, which created a fertile ground for French psychologists to espouse psychoanalytic principles. Indeed, Freud and Jung had many followers in France, such as Françoise Dolto and Jacques Lacan. This preponderance remains conspicuous today in all areas of psychotherapy,” wrote Cédric Ginestet and Elizabeth Spitz in Psychologist magazine, a publication of the UK's Royal Society of Psychologists.
This may sound a bit theoretical, but it's clear that psys are well-respected in this country, on a par with France's intellectuals. Psys such as Boris Cyrulnik, Marcel Rufo or Serge Hefez are household names and they regularly appear on TV, or write columns in women's magazines.
You may not have heard of them but most French people have.

Photo Pascal Pochard-Casabianca, AFP: psychologist Marcel Rufo (right) is interviewed for a woman's magazine
So who goes to the psy, and why?
People living in urban areas are more prone to seeing a psy, given the concentration of health professionals in towns and city, and the cost of consulting. And it's also more accepted.
“Although things are changing and psychology has become much more democratic, many people are worried about consulting because they think psys are for mad people or intellectuals living in big cities,” according to Le Cercle Psy magazine.
Depression is the main reason, followed by a general feeling of angst followed by stress, anxiety and family problems, according to a report from the French psychology institute Ifemdr.
Studies also show that an increasing number of young people are going, and that more women consult than men.
“If making an appointment has become a common occurrence, figures regarding men may be slightly skewed. In Western culture, men are still too used to having to show themselves in their best light all the time, and hide it if they're not well. Some of them prefer not to admit that they are seeing a shrink,” the report said.
Catalina Martin-Chico, a French photographer has been seeing a psy for 20 years. She's been doing a deeper 'analysis' for the past 10 years, and goes three times a week.

“If you're doing an analysis, you have to go at least twice a week. I travel quite a lot, so we negotiated a price, and I go three times a week. I think that's really great, as then you really have time to work on yourself,” she said.
Certainly, going to a psy in France isn't cheap with a consultation costing 50 euros on average. However this year, in a bid to cut down on the number of anti-depressants French people consume, the health authorities introduced a new measure in parts of the country which allows patients with light or moderate mental health problems to get up to 20 consultations for free.
The measure is being tested out in four departments (Landes, Morbihan, Bouches-du-Rhône et Haute-Garonne) over the next four years and could be rolled out to the rest of France if it is successful.
So the numbers of French visiting a psy will likely only rise.
READ ALSO: France's problem with autism – and its roots in psychoanalysis