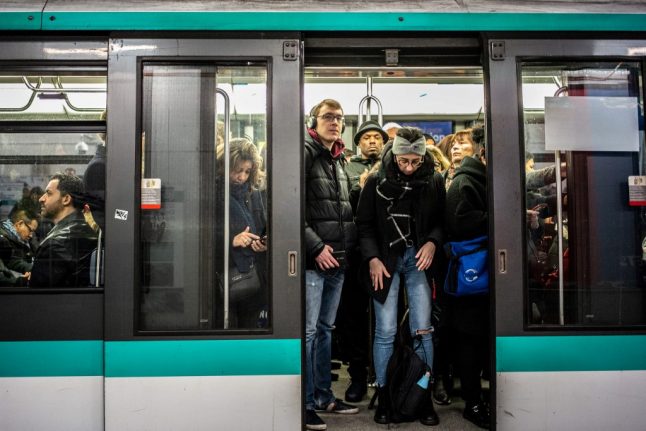 Thursday saw striking workers pour into streets across France on Thursday for a sixth day of mass demonstrations against a pensions overhaul, a show of defiance after Prime Minister Edouard Philippe said a historic transport stoppage “has gone on for too long.”

The rallies came on the 43rd day of a strike that again snarled train traffic and caused misery for millions of commuters in Paris especially.

“It's never too late to make a government back down,” Philippe Martinez of the CGT union said ahead of a demonstration at the Montparnasse train station in the capital that included striking teachers, lawyers and hospital workers.

While services are gradually improving travel disruption would continue on Friday with the Paris region worst hit.

Paris transport authority RATP said travel would be “disrupted” on Friday but there would be a significant improvement compared to Thursday.

All Metro lines in Paris were operating on Friday albeit mostly with limited services and restricted hours (see tweet below for more details).

Only the automated lines 1 and 14, plus line 11 were operating as normal.

All the RER commuter lines, including RER B which serves the city's two airports will operate although with slightly fewer trains than normal.

It was the same story for Transilien train services which operate in the Île-de-France region.

Intercité and TER regional trains were running slightly fewer services than normal but far more than when the strike first began. On Friday 8 out of TER trains and two out three Intercité services were running.

Philippe's office estimated Wednesday that the strike had cost the SNCF around 800 million euros ($890 million), and nearly 200 million euros for the Paris transit authority RATP.

But while labour leaders have called for port blockades and other walkouts to amplify their protest, demonstration numbers have steadily eroded since December, even as several polls show public support for the strike hovering at around 60 percent.

About 452,000 people protested across France last Thursday, including 56,000 in the capital, according to the police, compared with 805,000 nationwide on the first day of the strike on December 5.

The government aims to finalise its bill for approval at a cabinet meeting on January 24 before submitting it to parliament, where a vote is expected within months.

The reform would be rolled out gradually for workers born in 1975 and later, though the government has already granted exceptions to police and military personnel while delaying the shift for Paris Opera dancers, who also have their own pension regime.