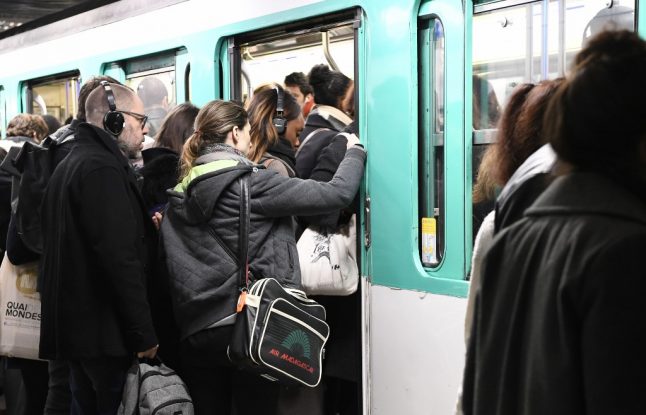 1. Pushing to get on before people get off

It’s the sort of naughty misbehaviour that Parisians occasionally resort to when trains are unusually full. During strikes however it seems like all norms of politeness have been thrown out of the window, with people not even bothering to pretend that they are waiting for commuters to exit the trains before squeezing themselves in.

Believe it or not, there are rules to using the Metro and one of the principle ones is that you wait at the side of the doors until all passengers have disembarked before you get on. At some particularly busy platforms there will be RATP staff to enforce this rule.

READ ALSO The 12 commandments of Metro-etiquette

2. Any form for pushing

During the strikes it's not just been the trains themselves that are crowded, but the platforms and corridors in the stations too. But however crowded they are, elbowing your way through the jam-packed corridors is not recommended either.

We've all seen the athletic displays of people choosing to vault the barriers rather than paying for a ticket, but this gymnastic display is in a class of its own. The impressive method would be incredibly dangerous if the train starts moving, however. But at least he’s not pushing.

4. Climbing a building to make a point

Unless you are 'French Spiderman' Alain Robert, of course. To show his support for the pension reform strike movement he climbed the Total tower in the west of Paris's business district of La Defense on January 13th. The police were at the top to greet him. Paris may be a romantic city and your bus/train or flight delay may seem excruciatingly long, but under no circumstances are these two conditions together a carte blanche to incessantly snog your special someone for the whole journey.

Believe me, it makes the journey unbearable for the poor person seated next to you who has to listen to the slurping.

6. Letting your kid play loud computer games with the sound on

This is not okay, ever. Even – no, especially – during long journeys. Same also applies to playing your own music and videos – there's a reason that headphones exist and it's to spare the person next to your from your choice of music.

The strikes have also been accompanied by protests and demonstrations which while in the main peaceful did see outbreaks of trouble. We would very much not recommend copying this ‘yellow vest’ protester in Nantes, who had a rather original way of showing that he would not surrender.

The extremely high pressure of the water cannons have been known to cause serious injuries and at the very least would smart a bit if you get caught in a sensitive area. When the train is filled to the brim with exhausted passengers, this is maybe the worst thing you could do to your co-commuters.

But, if you do accidentally slip up, just look in disgust at your neighbour and pretend it wasn't you.