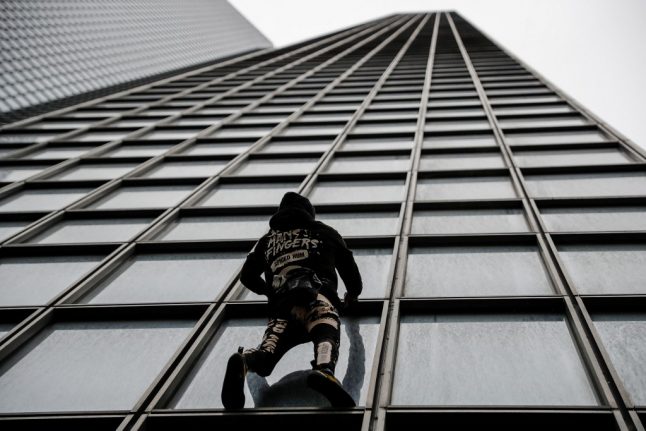 “People spend 40 years of their lives slaving away, often in a job they don't even like,” Alain Robert told AFP before beginning his climb. “We want people to live decently.”

Robert, known worldwide for scaling landmark towers without ropes – and usually without permission – began his ascent of the 187-metre Total building in the La Defense business district at around 10.30am. Passers-by gaped as he mounted the lattice of metal-framed glass panes, taking 52 minutes to reach the top, where as usual police and security guards were waiting.

“It was quite cold, I couldn't feel the tips of my fingers so it was tricky,” Robert said. “And also I'm not in the same shape as I was 20 years ago!”

“I'm 57, so technically not far from retirement. And climbing is the only way I make money,” Robert said before being taken away.

Unions have been waging a crippling transport strike against the pension overhaul since December 5th, disrupting train services and making commutes miserable for millions, especially in the Paris region.

The government wants to forge a single system from 42 separate schemes, doing away with many of the 'special regimes' that allow people to retire earlier than the legal retirement age of 62. “They need to stop telling people to work more and accept less, because that's what this reform is about,” Robert said, echoing claims from France's hard-line unions, which are demanding the government withdraw its plan.

It is not the first time Robert has climbed to promote a political message.

Last August, he unfurled a “peace banner” while racing up the 68 floors of the Cheung Kong Center in Hong Kong as the city was rocked by pro-democracy protests challenging Beijing's authority.

And in 2015, Robert scaled the Engie tower in La Defense to draw attention to calls for a more transparent banking system.