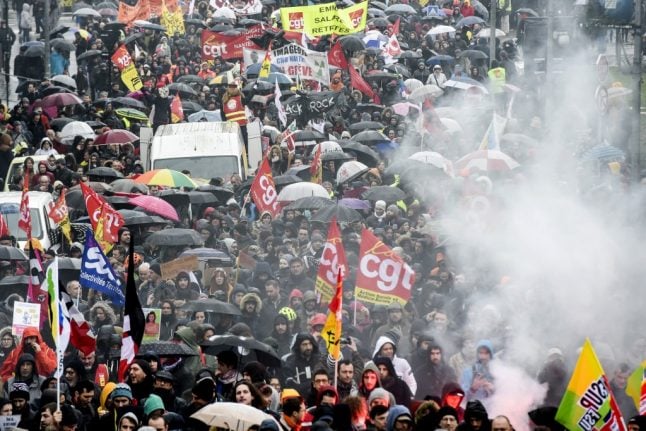 More demos are again planned for Saturday January 11th in Paris, with both pension reform and ‘gilets jaunes’ protests set to take place.

Acte 61 of the yellow vest movement will start in Paris’s 13th arrondissement at 11.30am and make its way toward Nation in the 11th/12th arrondissement, where it will merge with a pension reform rally starting from there at 1.30pm.

The double protest will then make its way through Place de la Bastille and end in Place de la République.

There will likely be a huge police presence in the capital after recent marches were marred by vandalism and violent clashes between radical protesters and police.

Unions have called for protests across the country to keep the pressure on the government as they aim to force it to back track on its controversial pension reform.

SNCF has promised a “gradual return to normality” in terms of its high-speed TGV trains from Monday onwards.

As for moving around on Paris's metro, this is how transport strikes will affect services:

Line 2: open from 8 am till noon, 1 train every 10 minutes throughout the line.

Line 3bis: open from 1pm to 6 pm, 1 train every 5 minutes throughout the line.

Lines 6, 8 and 11 will be open in the morning and after with reduced services and several stations closed.

Lines 7, 12 and 13 will only open for several hours throughout the afternoon with reduced services.

Line 14 will run as normal.

Paris Police have banned any “gathering of people claiming to be yellow vests” on the Champs-Elysées Avenue, roundabout and adjacent streets as well as the Elysée Palace, the National Assembly, the Paris Police Prefecture itself or the Forum des Halles shopping district.

Saturday and Sunday will be the 38th and 39th consecutive days of strikes against France’s controversial pension reform.

Only Laurent Berger of the moderate CFDT union mooted the possibility of rapprochement, saying Prime Minister Edouard Philippe had shown a “commitment to openness” regarding the disputed proposal to make people work until 64 for a full pension — two years beyond the official retirement age.

“But as I've said for several days now, we need to see what happens,” he said.

Both the CGT and FO unions, which are demanding the reform be dropped entirely, vowed to press ahead with the strike, now in its sixth week.

“Our determination remains absolute,” FO chief Yves Veyrier said after his meeting with Philippe and other officials.

The government says the new “pivot age” of 64 would plug pension deficits set to soar in coming years as a growing number of retirees live ever longer.

Unions were told at Friday's meetings that the measure would save five billion euros ($5.6 billion) by 2023 and some 11 billion euros by 2026.