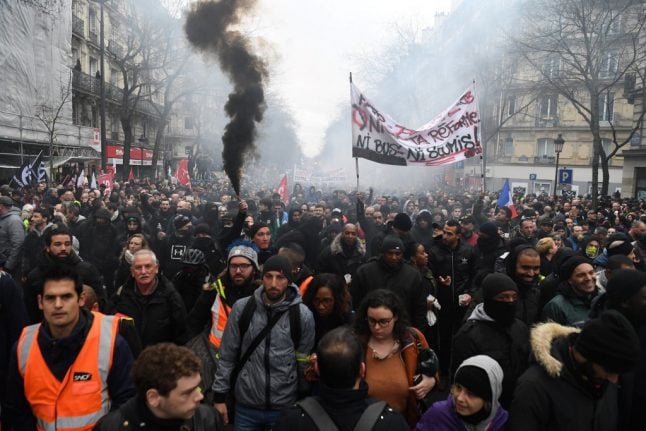 Expectations of a breakthrough were low, however, after the government unveiled its draft law overnight that still contains a provision that would require people to work until 64 for a full pension — a red flag for unions.

The move came after a fourth day of mass demonstrations since December by opponents of a reform that aims to sweep away France's 42 separate pension schemes in favour of a single system. Some 452,000 people turned out across France for marches that were again marred by clashes with police and vandalism, with 27 people detained in Paris.

Rallies are again planned for Saturday and new protests have been called for three days starting next Tuesday.

“We’re calling for new protests to be organized on January 14, 15, 16, the details of which will be specified on Saturday evening depending on the success of Saturday’s interprofessional mobilisation”, said Eric Beynel, spokesperson for trade union group Solidaires.

“We have to step up our actions, and other sectors have to take up the baton,” Benoit Teste of the FSU teachers' union said late Thursday.

The hardline CGT union, the largest among public-sector workers, this week began blocking refineries and fuel depots, which have already caused fuel shortages in some areas.

Train services and Paris metro lines were again curtailed Friday as France's longest-ever rail strike entered its sixth week, with services at the main station in Marseille halted by dozens of strikers who descended on the tracks.

The government has said it is ready to compromise on the “pivot age” of 64, which it says is needed to erase a deficit that could reach €17 billion ($19 billion) by 2025.

That it two years beyond the official retirement age of 62, and people who retire beforehand would see their pensions docked.

But even the moderate CFDT union, France's largest, has demanded the pivot age be scrapped, though it still supports the creation of single points-based system.

It has urged the government to hold a separate “financing conference” with unions on possible alternatives to the pivot age, including higher contributions from employers.

The government's draft bill says measures for ensuring a balanced pensions budget will be discussed, but the pivot age will prevail if no agreement is reached by September 2021.