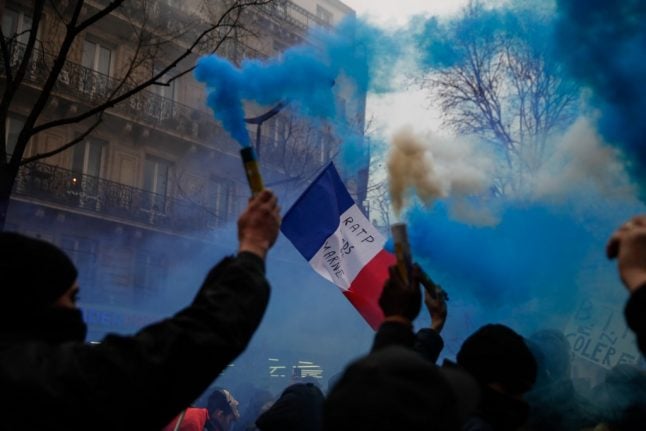 The text, described as a draft-bill (avant-projet de loi), includes 64 different articles and runs into dozens of pages.

The main aim of the government's reform is to introduce a single points-based system that would sweep away the country's 42 special pension schemes, many offering early retirement mainly to public workers.

Another controversial point, that has caused anger among unions is the plan to introduce a “pivot age” that would effectively see people having to work until 64 to gain a full pension – two years beyond the official retirement age of 62.

The government's draft bill, presented to certain elements of the French media on Thursday, covers both these controversial sticking points, which will no doubt anger the unions.

But many key points will remain up for discussion despite the publication of the bill.

French unions were not impressed by the government's move given that talks were set to continue with Prime Minister Edouard Philippe on Friday.

Leader of the hardline CGT union Philippe Martinez expressed anger they had not been sent a copy of the bill. He said he wasn't keen on being “made to look like an imbecile in front of the PM around issues that had already been written.”

The fact the draft bill differs very little from the initial report published by Jean-Paul Delevoye, who lead the reform project, will no doubt exacerbate the anger felt by unions who accuse the government of not listening.

“It seems the government has decided to tough it out. It’s a high risk strategy,” said John Lichfield, The Local's columnist.

“The lower turnout at yesterday’s marches and the weakening rail and Metro strikes appear to have persuaded Edouard Philippe – and Macron  – that they can win a war of attrition.

“No concessions could possibly have pleased the militant unions, who simply want the government to surrender. But the daft law makes only a small concession to the moderates, led by the CFDT.”

“The controversial pivot age of 64 is maintained but can  be replaced up to September 2021 if other of another way of financing the reform can be found. Will this be enough to bring the CFDT aboard? No.”

“If the dispute hardens, Macron will face a choice between surrendering to the CFDT and backing or sacking his Prime Minister, Edouard Philippe. For now, he is backing Philippe,” he said.

What's in the bill? “Pivot age” from 2022 unless unions come up with something better…

The “pivot age” so contested by unions is included in the bill albeit under a different name “âge d'equilibreé or “age of balance”.

Under the plan the official retirement age will remain 62, but the government wants to introduce a “pivot age” of 64 that would open the door to a full pension.

People who retire before then would have to accept lower monthly payouts, while those who work beyond would see their pensions increase.

The government says the move is necessary as people start working later and living longer, otherwise there will be too few working people to support the bulk of retirees under the pay-as-you-go system.

The French PM believes the “pivot age” will save the state three billion in 2022 and 12 billion euros in 2027.

Importantly the draft bill says the “âge d'équilibre” will be created in 2022 but will be the subject of negotiations with “social partners” who include the unions until September 2021 at the latest.

The government insists the debate is still open and have suggested the “age” could be changed if unions come up with a better solution that guarantees France's pension system is affordable and sustainable in the future.

This age for retiring on a full pension will be put in place progressively meaning it will be 64 for those who retire in 2027. The government says it could rise or fall depending on future life expectancy.

Certain professions such as police, soldiers, air traffic controllers and prison officers or those involving hardship will still be able to retire earlier on a full pension as they do now. They will pay higher contributions during their careers and the “pivot age” for these careers will be adapted accordingly.

Other French workers would still be able to retire at 62 legally, but obviously face receiving a lower pension.

As well as this, the bill will ensure that those workers who often have to work until 67 to earn a full pension will be able to retire at 64 without being penalised as they are under the current system. The universal pensions system based on points will enter into force in 2022 for younger workers and in 2025 for those born after after 1975.

Essentially the reform would create a single system based on points that would be accrued based on salary, so that “for each euro contributed, everyone gets the same pension rights”.

The value of a point could change, but the government says unions will have their say on any changes, which would have to be approved by parliament.

The government says points are fairer to part-time workers

A national universal pensions fund (caisse nationale de retraite universelle) will be set up in December 2020 and be led by a board that will include representatives of trade unions. The board will be in charge of ensuring the pensions system remains sustainable.

One aspect of the reform the government has regularly pushed to try to win over public opinion is the minimum pension of €1,000.

From 2022 low-earners who have worked for the minimum number of years will be eligible for a minimum pension of €1,000 a month.

Teachers have been joining the strikes and protests because they fear that a universal system would see their pensions fall dramatically. That's because they are  – currently calculated based on their final six months salary rather than average earnings over 25 years, which will be future calculation under the universal system.

Prime Minister Edouard Philippe has said that: “It would be unacceptable for teachers to lose a single euro of their pension”.

In the draft bill the government has tried to reassure teachers that they will not lose out because their salaries will be increased to ensure their pensions do not fall.

Other articles in the bill include a so-called “pension de reversion” which covers the pensions of widows/widowers after the death of their partner, plus guarantees to boost pensions for those with large families and for those who take parental leave to raise children.

What's to be decided?

The government still needs to lay out how each point in the universal system will be valued and how pensions will be calculated, plus how those on special pension regimes will be transfered over to the new system