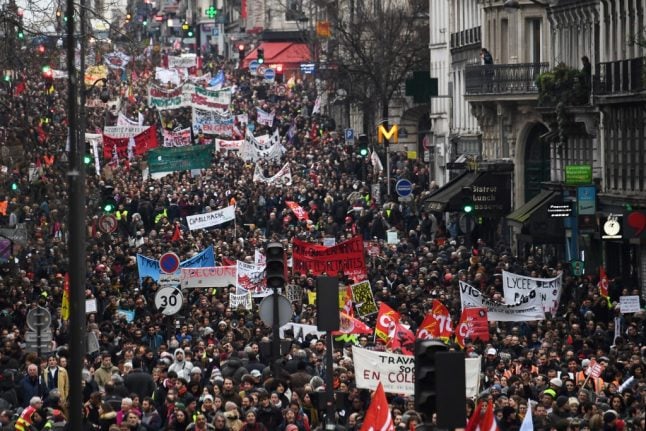 Unions called for another 'day of protest' on Thursday, January 9th as their long-running battle with the French government over pension reform continues into its 36th day.

Those unions are demanding the government drop its pension reform in their biggest show of strength in decades.

Protests took place in several cities including Paris where tens of thousands of workers, many from the public sector, marched west from Place de la Republique towards Place Saint-Augustin.

The hardline CGT union claimed 370,000 people joined the Paris protest but figures from police will likely be much lower.

“Between the government's stance of 'We're talking, everything is on the table' and the reality, you have to wonder if it really intends to… take the views of unions into account,” Philippe Martinez of the hardline CGT union said ahead of a march in Paris.

Officials have said they are ready to negotiate, in particular on the hotly contested “pivot age” of 64 the government has suggested people will have to work until for a full pension — beyond the official retirement age of 62.

As usual riot police were out in force with previous marches having been marred by vandalism and clashes with police. The Paris march began an hour later than planned, which unions said was due to the high turn-out.

The beginning of the protest was marked by tensions and minor clashes with police.

This is what the front of the Paris march looks like #greve9janvier pic.twitter.com/3wofXoEE0U

Although away from the sporadic clashes with police marchers played music and carried banners in opposition to the government's reform that opponents, including teachers, fear will see people working for longer and for less reward when they retire.

There were chants of “on ira jusqu'au retrait” meaning protesters vowed to fight on until the government scrapped the reform.

There were also marches in Marseille, Toulouse, Nantes and the south western city of Bordeaux, as seen below, with striking rail workers at the front of the demo.

According to independent estimates some 120,000 people took part in protests elsewhere in the country apart from Paris.

“This isn't a reform, it's a sellout,” read one banner in the central city of Clermont-Ferrand.

The government and unions will keep a close eye on the turn-out across the country which will be a significant sign as to whether the movement against the government's controversial pension reform was growing or dwindling.

The number of marchers on recent “days of protest” have been falling since 800,000 turned out on December 5th for the first day of the strike.

On Wednesday night there were also reports of tens of thousands of homes being left without power in Dordogne and Lot-et-Garonne, with authorities blaming “malevolent acts” linked to the anti-pension reform movement.

Meanwhile on Thursday train services across France and public transport in Paris were severely disrupted by the ongoing strikes.

On the railways three in five of the normal services are running on the high speed TGV routes and the budget Ouigo services.

Local services are more disrupted with one third of suburban Transilien services running, two in 10 Intercité routes and four in 10 local TER services.

These services represent a fall in the lines that have been running in recent days, as SNCF workers are expected to take part in protests.

International services including the Eurostar are still running a reduced service, and Eurostar has published a reduced timetable running until January 12th on its website.

In Paris there is also more disruption after some improvements in recent days.

On the Metro only lines 1 and 14 – which are automated – are running as normal.

All those lines have fewer services than usual and many stations on the lines are be closed.

The trams have been running virtually as normal in recent days but Thursday sees a dip in services.

The RER suburban trains are running from 5am to 9pm, but with significantly fewer services than normal and three quarters of the normal bus routes are running.

Tourist attractions in Paris were once again affected by the strike with the Eiffel Tower closed on Thursday.

?? Due to a national strike, I'm closed today. Access to my esplanade remains open and free of charge.#tourEiffel #EiffelTower pic.twitter.com/yUkp4RcLSs