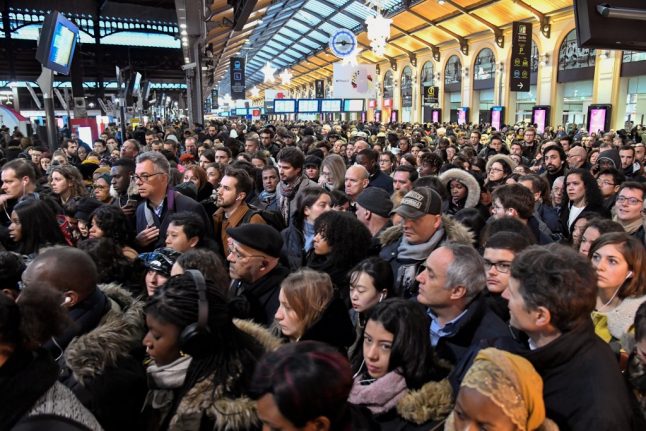 The French strikes have lead to hundreds of millions of losses for the railway companies. Photo: AFP

35 – days of strike action and counting

The strike to protest the government’s pension reform plan began on December 5th. Most of the professional groups have been striking on an on-and-off basis, with only the transport sector continuing since the beginning.

According to the public national railway operator SNCF, 6.3 percent of their workers were on strike on Monday, January 6th. This is low compared to the early days of the strike when nearly 60 percent participated in the walk-out.

Of the train drivers – the group that would lose the most with the new pension reform –  36.5 percent were still striking on January 6th, compared to 85 percent in the early days of the strike. Since the strike started SNCF has reimbursed 1,4 million train tickets.

Each day of strike costs the public national railway operator SNCF €20 million, according to SNCF Chairman Jean-Pierre Farandou. As the strike entered its second month on Monday, the company’s total loss amounted to €640 million.

The Paris public transport operator RATP has declared a loss of €3 million a day in Navigo pass reimbursements and other costs. As the strike entered its second month, this amounted to a total financial loss of nearly €100 million.

€2 million – the size of the CGT union’s cagnotte

Workers on strike forfeit their salaries, but the unions have put aside money pots (cagnottes in French) that they dip into during strike periods. Donations helped the CGT unions's cagnotte pass the €2 million mark this week. However the cagnottes don't nearly cover worker's financial losses, with daily compensations of the CGT workers amounting to between €10-50. Rail workers belonging to the CFDT union get €16 a day.

Those commuting into Paris by car have had to suffer through hours of traffic jams, with December 9th setting the record length of 631km – the double of a “normal” Monday.

The longest car queue ever registered into Paris was in February 2018 after a rare snowfall covered the capital with between 12 to 20 centimetres of snow. It's been a tough month for those commuting into Paris by car, as clogged roads have lead to people being stuck in queues for hours every morning and every evening. Photo: AFP

Paris emergency workers were called about 350 times between December 5th and December 15th due to accidents involving electric scooters, two-wheelers and pedestrians. This represents a 40 percent increase in the number of accidents for this period.

The strike has hit the capital particularly hard, with the Paris Chamber of Commerce registering a between 30 and 50 percent slump in profit for the capital’s shops.

During the December 17th national strike day, the owner of a restaurant at the Place de la République, where the Paris protest was held, told The Local that she lost 70 percent of her revenue on average during strike days.

Dancers at the prestigious Opéra de Paris are among the groups striking to protest the government’s plan to do away with their special pension regime. The cancellation of one single show like Le Prince Igor, which is currently on, represents a loss of €358,000 per night, according to the AFP.  Around 45 shows have been cancelled since December 5th, meaning the total financial loss now amounts to about €12 million. Ballet dancers have joined the strike against the proposed pension reform. Photo: AFP

Public support appears to be shifting in the government's favour, with just 44 percent backing the strike in an Ifop poll released on Sunday, down seven points from the previous survey on December 19th-20th, according to the AFP.

We previously talked to Bruno Jeanbart, Deputy Director of the polling institute OpinionWay, who said that the strikes have divided the French public opinion in two.

42 – the current number of pension regimes

The current French pension system is made up of 42 separate regimes, with differences regarding how pensions are calculated and at what age workers can retire at. The so-called “special regimes,” with special pension benefits for certain professions (like the railway sector), are the ones sparking the most outrage among the defenders of the pension reform.

EXPLAINED What are France's special pensions regimes and why are people striking to protect them?

1 – the new number of pension regimes

Instead of the current system of 42 different pension regimes, with differences in both how pensions are calculated and the age that workers can retire at, the government wants to introduce a universal system.

At the core of the conflict is the social impact of such a system, with the government claiming a universal points-based system is the fairest solution and strikers saying the system would penalise those in already vulnerable situations.

READ ALSO Here is a reminder of what the conflict is really about.

Although the legal retirement age will remain at 62, the government wants to introduce a 'pivot age' – where the maximum pension kicks in – a 64. If you have followed the French media strike coverage, you will have heard of the ‘bonus-malus’, the idea that those retiring before and after the age of 64 will be respectively financially penalised and rewarded. The 'pivot age' is one of the main points topping the list of conflicting interests as talks between the French government and unions resume on January 7th. Photo: AFP

1975 – the birth year of those affected by the reform

The government previously planned to include everyone born in 1963 or later, but in response to the strikes chose to push back the age-limit to 1975. Those entering the labour market for the first time in 2022 will be put straight on to the universal system, with changed phased in gradually for those in between.

These are the unions that have joined the movement:

CGT – The oldest French union. Represents workers in several sectors, including about a third of train drivers.  Historically closely aligned with the French Communist Party, the CGT is the most hardline of the striking unions. CGT leader Philippe Martinez has previously said that the CGT will not accept anything less than a complete capitulation from the government, and that he will be the last man standing in the fight. The CGT is currently organising the 96-hour long blockades of France’s oil refineries.

CFDT – Joined the fight late. Initially a lukewarm supporter of the government’s idea of a universal, points-based system, the CFDT union decided to join the strikes after PM Edouard Philippe announced the ‘pivot age’ of 64 – a “red line” for the union. The CFDT is the largest of the French unions and also among the most moderate.

Unsa – Represents a large part of the Parisian public railway company RATP and the national railway company SNCF. Aligns itself with the “reformist” line of CFDT, opposing the pivot age.

Force Ouvrière – FO was created in 1948, following an internal split in the CGT. Historically the FO members have been skeptical of the Communist Party's influence on the CGT. FO is today France's third largest union, behind CGT and CFDT. FO wants to maintain the existing 42 special regimes.

Solidaires – Represents about one third of train drivers and a little more than 25 percent of train conductors. Echoes the CGT’s demand that the government must scrap the form and start anew.

SNUipp-FSU – The largest French teachers' union has been part of the protest movement since the beginning. To ensure the future of their pupils, French teachers are not striking on a full time-basis, but on a series of one-day strikes.

CFE-CGC – Represents professional employees with higher education and/or in management or executive positions.

CFTC – The Christian union CFTS is pro a points-based pension system, but believes the government’s proposal to be “far from fair.” Also opposes the pivot age, but not as firmly as the CFDT.

We talked to the unions before the strikes began to hear why, in their words, such disruption was necessary.