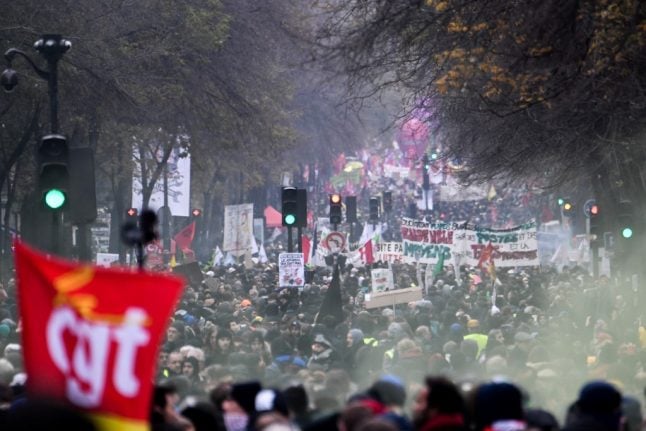 Turnout at Thursday's protests will be crucial. Photo: AFP

The dispute over pension reform has now lasted longer than the May 1968 student and worker revolt. The strikes on the railways are the longest since the 1930s.

Is there light at the end of the tunnel? Maybe. The next couple of days will be crucial.

The government and the more moderate union federations, led by the CFDT, are absurdly close to an agreement after talks on Monday. Almost all that now separates them are spin and bragging rights.

How should they present a mutual climb-down over the government’s proposal to move the de facto full pension age from 62 to 64 in seven years’ time?

The government has more than enough parliamentary support to push through the reform in February – merging 42 chaotic state pension systems into one. In theory, it does not need any of the unions to agree.

In practise, it needs the blessing of the moderate unions if it wants to deflate public suspicion and hostility, still running at 50 to 60 percent, according to opinion polls.

With the militant unions, no agreement is possible. In 23 years covering France, I don’t remember the largest militant federation, the CGT, signing up for anything (not even the Socialist government’s 35-hour week in the late 1990s). Leaders of the hardline CGT union are still adamant that the reforms must be scrapped. Photo: AFP

The reformist CFDT, France’s largest union federation, needs a symbolic victory over the government – but most of all over its ancestral enemy the CGT. It needs to prove that its policy of belligerent but constructive engagement brings greater benefits than belligerent non-engagement.

The CFDT endorses most of the reform. It needs to claim a triumph of some kind on the proposed 64 “pivot age”, when full pensions would apply from 2027. It may yet succeed

The Prime Minister, Edouard Philippe, says that the pivot age, or something similar, is essential to prevent a multi-billion euro black hole in the new, unified state pension system. He  needs a symbolic victory to preserve the credibility of a reform which has already been moth-eaten by special concessions to police, firefighters, truckers, nurses and others.

A solution appeared to be in sight before the resumption of talks between the government and the unions on Monday. The financial black hole would be studied by a conference of all parties later this month.

The breakthrough failed to materialise. The Prime Minister insisted that the pivot age must be on the conference table at the start. The CFDT leader Laurent Berger said that it must be withdrawn beforehand (despite seeming to suggest earlier that he might accept it in amended form).

What is at stake here – suffering rail and Metro travellers will be delighted to hear – is more abstract than real. The official retirement age in France is 62 but the average real retirement is already 63.  This is likely to rise to 63 and a half before the proposed pivot age of 64 becomes law in 2027.

The chances are that the PM Mr Philippe and the CFDT leader Mr Berger can find a form of words – perhaps at the next meeting on Friday – which will offer both of them a victory of sorts.

The more left-leaning parts of President Emmanuel Macron’s party, La République en Marche, are already fed up with the Prime Minister for annoying the CFDT (whom they regard as an indispensable ally). President Macron, who campaigned for the reform in 2017, remains sphinx-like and uncharacteristically silent.

What then of the more militant unions? France, to its eternal difficulty, does not have one union federation or “TUC”. It has eight union federations of differing political flavours, from the Catholic CFTC to the Trotskyist SUD, via the ex-Communist CGT.

The CGT and SUD say the strikes are a battle against an “ultra-capitalist” plot to destroy the French state pension system for the sake of Macron’s chums in the private pension industry. Really? Listening to their members, it is difficult to know where sincere revolutionary fervour ends and self-serving hypocrisy begin.

Most of the actual striking in the last five weeks – involving just 0.1 per cent of the French workforce – has come from rail and Metro workers on privileged pension regimes subsidised by other taxpayers. Rail drivers for instance can retire at 52 on around €3,000 a month – double the average pension.

Under the concessions already made by the government, all rail drivers over 32 years old, three quarters of the total, will retain these benefits. Others will be compensated.

That is not enough, say the militant unions. The reform must be scrapped. Their aim is to defeat and damage Macron. As the number of striking workers falls many train and Metro lines have reopened. Photo: AFP

The CGT and others are counting on a massive turn-out in the third big marching day, or nationwide “day of action”, tomorrow. They also hope that this week’s blockade of oil refineries will bring misery to motorists. They predict a new lease of life for the fading strikes on the railways and the Paris Metro.

None of these seem likely.

The CGT leader Philippe Martinez – whose heroic moustache makes him look like a Daily Mail identikit of a French union boss – forecast a post-New Year resurgence of the number of rail and Metro strikers. The strike rate has scarcely moved –  up from 6.2 percent to 6.8 percent of the SNCF workforce, compared to over 30 percent in the early days of December.

The militant unions are also hoping that the government’s determination will be sapped by the renewed militancy of unlikely militants, from lawyers to nurses. A heavy scattering of people in various professions is joining the strike this week to try to defend their own separate, well-funded state pension regimes.

The turn-out for tomorrow’s marches will be important.

If the nationwide numbers are lower than the two “action days” before Christmas (800,000 on December 5th), the government may be emboldened to offer few concessions on Friday. On the other hand, a high turnout may spur Macron to order the PM to make a deal.

Paradoxically, the greatest beneficiary would then be the moderate CFDT, which is snubbing tomorrow’s marches (but may join another day of action on Saturday).

Here is a hazardous prediction: the dispute is on its way to a messy settlement; it may still be several weeks before France returns to normal.

What a way to run a country. Is it grève doctor? Oui, mais pas sérieux.