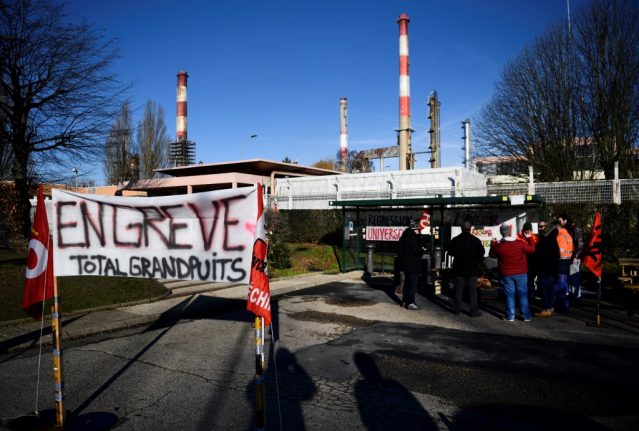 The hardline CGT union has called for a blockade from Tuesday, January 7th to Friday, January 10th, potentially leading to filling stations across the country running dry.

READ ALSO Should drivers in France prepare for fuel shortages?

“We're calling for a big event at all refineries in France, from January 7th to 10th, to ensure that no product comes out for 96 hours,” Thierry Defresne, the CGT's central delegate at Total, told radio station Franceinfo.

He added: “At the end of these 96 hours of strike action, the question will be asked whether we will move on to the stage of shutting down the installations.”

While the right to strike is protected in the French constitution, the right to blockade is not ans French Prime Minister Edouard Philippe says he has asked local police forces to break up blockades.

It is not the first time that oil depots have been blockaded during the ongoing strike action, which began on December 5th in protest at the French government's planned overhaul of the country's pension system.

Action has continued since then at several of France's eight refineries and the Grandpuits depot in the greater Paris area has been blocked for three weeks.

But without a total blockade, supplies have been getting through and most motorists have been able to fill up as normal.

So far the strikes have largely affected public transport, with trains and the Paris transport system remaining disrupted.

However with the strike now in its second month many of the workers – who are not paid during strikes – have begun to feel the financial pinch and are returning to work.

SNCF has reported that just 30 percent of train drivers are still striking, compared to 85 percent at the start of the action, leading to the rail operator being able to increase the train services running.

The same effect has been seen in Paris where the city's RATP transport network, although still heavily disrupted, is running far more services than in early December, and all Metro lines are now running at least a partial service.

Against this backdrop the more hardline unions like the CGT, which has vowed it will not stop the strikes until the government scraps its proposed reforms entirely, is looking for alternative ways to make its point.

CGT Energie members have claimed responsibility for a series of short power cuts that have hit towns including Bordeaux, Lyon and Perpignan as well as disrupting several sports matches with short blackouts at stadiums.

The CGT and other unions will also be joining in another day of demonstrations planned for the major cities on Thursday.