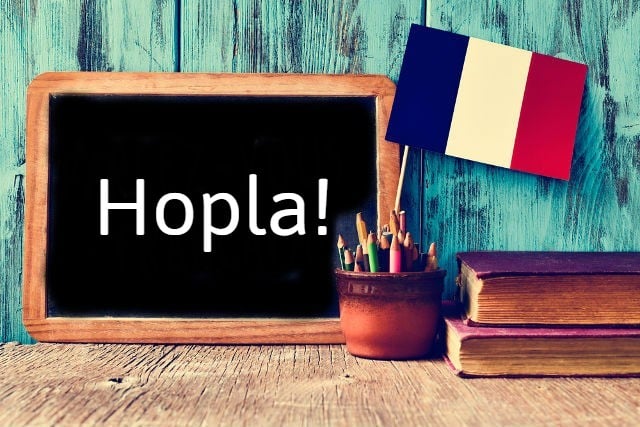 Why do I need to know hopla?

If you have lived in France for a while, you will have noticed a fair few French words that are really more sounds than words – things like pfff, bah, oh là là or miam. These sounds are deeply integrated in a French person’s everyday vocabulary, are loaded with meaning and will really give your language that casual, conversational feel.

Hopla is another of these frequently used sounds.

Pronounced with a silent h, a sharp p and a lingering a, hopla (also spelled hop-là), hopla is a way of bringing attention to what you do.

It does however have slightly different meanings depending on the context.

You might have heard a waiter say hopla as he puts your plate down. In this case it's like saying voilà – there you go.

It can also mean attention, or oops.

Let’s say that you bump into a stranger on the street. By exclaiming hopla, you alert the other person that this was an accident and you did not intend to be rude – nor do you accuse them of being the one responsible for the accidental bumping. Here, hopla is a disarmer.

Hop is a word French people use for encouragement, like 'come on' or 'go!'.

Picture a swimming class where the participants are supposed to dive in one after the other. The teacher will say et hop ! – And go! – between each participant.

A mother might tell her teenager son Allez-hop! On range – Come on, let's clean up.

If you hear hop hop hop, it means you're in trouble.

Someone could say this to you today if you tried to snatch a piece of the special Galette de Rois before the person hiding under the table had decided who would get the piece. Confused? Read this to learn about the peculiar French tradition.