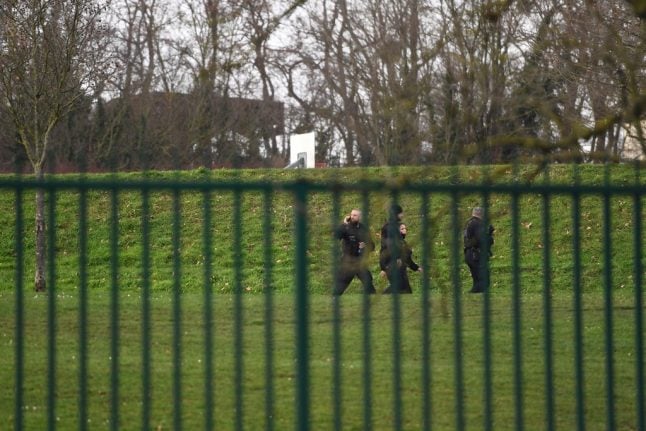 Police secured the park in the Parisian banlieue Villejuif after a man attacked several passers-by with a knife on Friday January 3rd.Photo: AFP

A knife-wielding man went on the rampage in a park south of Paris Friday, killing a man out for a walk with his wife and wounding two other people before being shot dead by police, officials said.

The Paris police department said the man had attacked “several people” around lunchtime in the park in the suburb of Villejuif.

Some managed to evade him, but the man claimed at least one life — that of a 56-year-old Villejuif local, according to the commune's mayor Franck Le Bohellec.

The victim “was walking with his wife when the attacker approached; he wanted to protect his wife and it was he who received the knife blows,” the mayor explained.

According to a source close to the inquiry, another man was seriously wounded in the attack and a woman sustained light injuries.

The attacker fled and was later shot dead by police in the neighbouring suburb of Hay-les-Roses.

He had made his way to a shopping centre “where he seemingly intended to continue his attack,” Hay-les-Roses mayor Vincent Jeanbrun told BFMTV.

“Luckily the police were quickly alerted and made their way rapidly to the scene where they neutralised him by killing him,” Jeanbrun said.

Police did not provide a motive for the attack, which came just four days before France marks the fifth anniversary of the killing of 12 people at satirical magazine Charlie Hebdo in Paris by two brothers vowing allegiance to Al-Qaeda. France remains on high alert after being hit by a string of attacks by jihadist extremists since 2015, with more than 250 people killed in total.

The day after the Charlie Hebdo attack, a man linked to the Islamic State (IS) group shot and killed a policewoman in a Paris suburb before taking hostages at a Jewish supermarket the following day, killing four more people.

Police eventually killed all three attackers but it was the beginning of the wave of strikes on French territory.

The deadliest came in November 2013, when 130 people died in bombings and shootings at Paris's Bataclan concert hall, several bars and restaurants, and the Stade de France sports stadium.

In 2016, a man rammed a truck into a crowd in the Mediterranean resort of Nice on the July 14 national holiday, killing 86 people. He was shot dead by police.

In December 2018, a man who swore allegiance to IS shot dead five people at a Christmas market in the eastern city of Strasbourg. Police shot and killed him after a two-day manhunt.

Most recently, a police staff member who had converted to a radical version of Islam stabbed four colleagues to death at the Paris police headquarters in October.