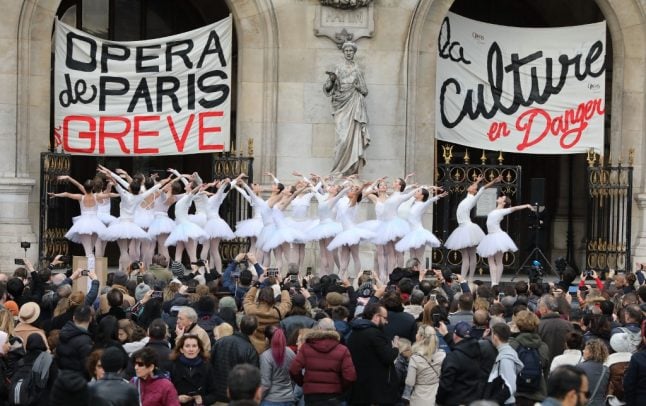 News of the offer added to a series of concessions made to striking workers in different sectors, as the strike entered its 24th day.

But the government is still insisting it will maintain the main thrust of the reform — to replace more than 40 separate pension schemes with a single points-based system.

They proposed that the pensions reforms only come into force for dancers recruited after January 1, 2022, according to a document, dated December 23, consulted by AFP.

The government, in its letter to the dancers, also proposed a professional conversion plan for dancers reaching the end of their career.

Footage of the striking dancers and their orchestra performing extracts from “Swan Lake” in front of the historic venue on Tuesday, December 24, went viral this week.

The dancers and musicians are on strike alongside other workers protesting the government's planned pensions reform.

The special retirement plan for the Paris Opera, which allows dancers to bow out at age 42, was introduced in 1698 by king Louis XIV — making it among the oldest in France.

The government has also written to the Comedie Francaise, France's most prestigious theatre company, and the directors of both companies have been invited to talks from early next year.

Both the dancers of the Paris Opera and the actors at the Comedie Francaise have already cancelled performances as part of their industrial action.

The dancers' strike action alone has led to more than eight million euros in losses, according to figures provided by the company at the beginning of the week. Action by transport workers hit rail services across the country and commuter routes serving the capital Saturday, complicating matters for those returning from Christmas breaks or leaving for holidays over the new year.

But thousands turned out across France Saturday to demonstrate their support for the strikers.

They included members of the “yellow vests” movement that has been campaigning against French President Emmanuel Macron's policies for more than a year now.

And with the strike now in its 24th day Saturday, it has lasted longer than the 1995 transport strike, which went on for 22 days before it forced the government to abandon its planned pensions reform.

Pietraszewski, said on Tuesday the government would be “willing to compromise” in the negotiations. But he insisted there would be no revisiting the plan to do away with special retirement regimes.

The government has nevertheless now offered concessions of one kind or other to most of the sectors involved in the action: from rail, bus and metro workers to teachers, nurses and caring assistants.

The longest transport strike in France lasted for 28 days, also over Christmas, in 1986 and early 1987.