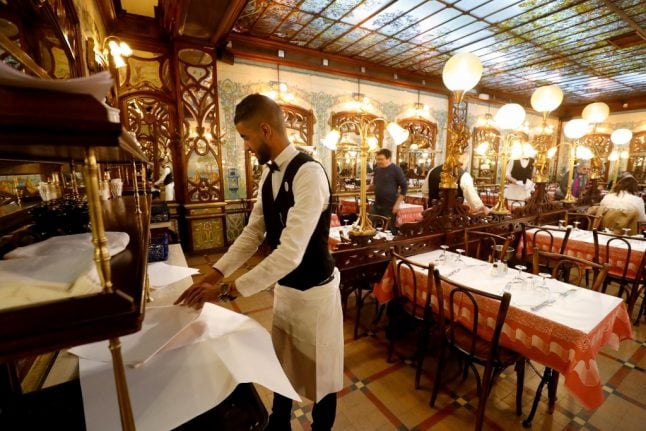 What are the rules around tipping a French waiter? Photo: AFP

It can be a social minefield knowing whether to tip or not, and how much is considered acceptable, so it’s not surprising that one of the questions that we are asked most often is around the tipping culture in France.

The French themselves have a bit of a reputation as stingy tippers, but is this just because of the culture at home?

The first thing to know about tipping in France is that it’s optional.

Leaving a bit extra for the waiter or waitress is considered a friendly gesture if the service was particularly good, it’s certainly not expected for every meal. If your barman is cheery, feel free to leave a few coins so he can buy himself a drink at the end of his shift, but it’s not compulsory. Photo: AFP

A tip in France is known as un pourboire – literally ‘for a drink’ and the amount that French people leave as a tip typically reflects that.

“The foreigners tip a lot more than the locals” says Baptiste, a 21-year-old waiter at a restaurant in the 19th arrondissement in Paris.

“I usually make €10 per day in tips, which is way less than 5 percent of each bill.”

“There is no absolute rule, but generally the French don’t tip a lot,” agrees Salim Petit, head waiter at Le Comptoire in the 19th Arrondissement.

“The amounts have got less and less over the last ten years.”

The reason that tipping isn’t such a big thing in France is that service is already included on the bill in a restaurant.

Since 2008, all restaurants and cafés automatically add a 15 percent service charge to the bill, which is supposed to go to the serving staff, in addition to the salary.

Waiters and waitresses are not particularly badly paid in France, and it is a job that has a higher status than is some countries like the US and the UK, where it’s often seen as a low skill job done by students or temporary workers.

So while some French people will round up a bill, or leave a few extra euros if the service was particularly good, they certainly don’t see it as obligatory.

“It truly depends on the speed and friendliness of the person who you have,” said lecturer Tineke Geoffroy, who The Local spoke to as she finished her lunch sat outside a nearby bistro.

“Most often, I just leave whatever coins I receive in change, even if it’s just a few cents. The same for taxi journeys.”

But the idea of leaving a centime more than you owe amused 32-year-old graphic designer Jean-Luc. “Maybe if you pay by cash it makes sense to get rid of the coins, but everyone pays by card now,” he said.

Some French people mention five percent as a base rate for the rewarding of good service. Many visitors find the service in France is slower than hey are used to. Photo: AFP

But the idea of ‘good service’ in France is often somewhat different to what foreigners are used to.

The cliché is of the grumpy Paris waiter but while he certainly exists, especially in the tourist hotspots, the service in most restaurants and cafés in France is perfectly pleasant.

But pleasant is not the same as being best buddies and if you’re waiting for your server to introduce themselves by name at the start of the meal as is the norm in some parts of the USA you will be waiting a long time.

Servers in France tend to take orders, deliver food and then leave you alone, you’re unlikely to get people popping by to ask how everything is going, top up your drink or clear plates until everyone is finished.

Many visitors also consider service in France to be quite slow.

This isn’t because the waiter or waitress can’t be bothered (well sometimes it is, but not usually) – it is because a meal or even a drink with friends is considered a leisurely affair where chatting to the people you are with is the most important thing.

Plates won’t be whipped away as soon as you are finished, there will often be a long pause before the dessert menu is brought, drinks won’t appear within second of you finishing your current tipple.

So just relax and go with the flow – eating dinner is generally not a timed event, instead chat to your friends, eat and drink when it arrives and know that at the end, you don’t have to leave more than a few coins, unless you really want to.