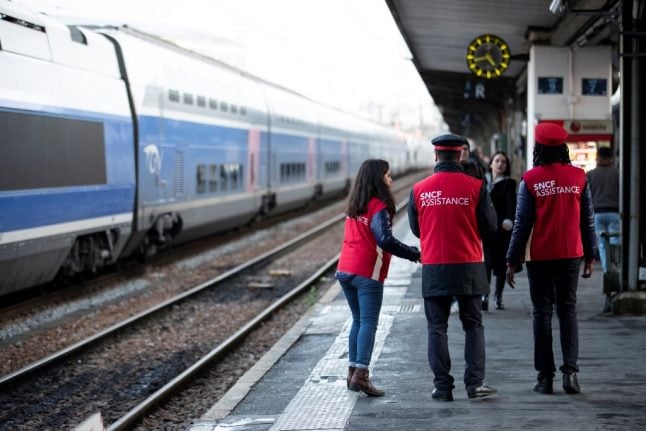 It had been hoped that unions would declare a 'Christmas truce' to allow people to travel as normal on the trains over the festive period, but despite some progress in talks on Thursday, the two biggest rail unions – the CGT and Sud-Rail – have ruled this out.

READ ALSO Is there a deal in sight between the  French government and striking workers?

Rail operator SNCF has now published its revised strike timetables running up to December 26th and overall over the holidays it is managing to run about half of its normal services.

Here's what is running.

This was set to be the big weekend getaway, as the majority of French schools break up on Friday, hundreds of thousands of families had planned to travel over the weekend.

According to SNCF, 1.7 million people had booked tickets for the weekend, but only about 850,000 will be able to travel.

For those who want to make their Christmas getaway slightly later, a total of 41 percent of high speed TGV and Intercité services will be running.

In total, SNCF says 208,000 people have had their train confirmed, while a further three percent of services will run with an adapted timetable – coupled to a later running train in order to maximise the number of passengers transported with a single driver.

But 192,000 passengers will have to either cancel their trip or try to find a ticket for a different service.

The same level of service will be running on Christmas Day and Boxing Day – 41 percent of the total services normally seen.

Four in 10 TGV services will be running.

There will be an increased level of service over this weekend, with SNCF saying it will be able to guarantee six out of 10 of the normal TGV services.

SNCF says the 'majority' of the 800,000 people who had booked tickets over this weekend will be able to travel, albeit perhaps not at their original time.

On Friday and over the second weekend of the holiday period there will be six in 10 TGVs running and seven in 10 of the normal Ouigo services.

The Eurostar is also running a reduced service and has already published a timetable running to December 31st on its website.

The increase in services follows the normal pattern of long-term strikes in France when many workers – who are not paid during strikes – may begin returning to work as they feel the financial effects of almost a month without pay.

On Monday, December 23rd, just 44.7 percent of SNCF drivers were striking, down from 85 percent at the start of the strikes and the first time the strike levels had fallen below 50 percent since the strike action began on December 5th.

Full details of SNCF services are available on the company's website here – and there is also an SNCF app which provides updates for ticket holders.