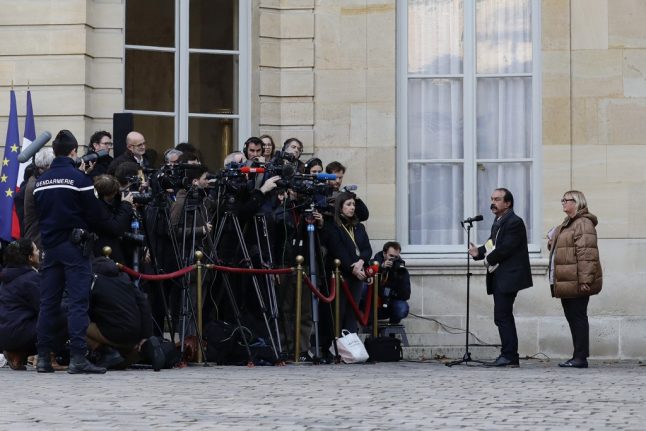 No breakthrough in talks means another day of strike action. Photo: AFP

On the plus side the French unions and government ministers are now at least sitting down and talking to each other about the controversial proposed pension reforms, and Prime Minister Edouard Philippe said on Thursday that there had been “advances”.

The French government wants to streamline France's current highly complicated pension system of 42 different regimes into one universal system, but unions say this will leave many people working longer and for a smaller pension pot.

But despite the positive noises – including one of the smaller unions Unsa saying it would be in favour of a break for the Christmas holidays – there is still no breakthrough so strikes continue across France on Friday, marking the 16th day of strike action.

And in fact in January things could be set to get worse, with the announcement on Thursday that unions representing pilots and flight crew are calling or strike action from January 3rd, after their own talks with the government broke down.

So here's what is scheduled for Friday;

On the railways there is another slight improvement in the services that are running.

Half of the usual high speed TGV services are running, along with 9 in 10 of the budget Ouigo lines.

The Intercité services are still quite badly disrupted, with one one in four services running and just four in 10 services on the local TER services.

SNCF has also said that over the weekend of December 21st and 22nd half its usual services will run, and on December 23rd and 24th it will be 40 percent of the normal service.

A full strike timetable running up to December 26th will be announced on Friday evening.

In Paris around half of Metro lines are now running, albeit with most of them offering a limited service during rush hour only. Lines 1 and 14 – which are automated – are runing as normal as they have done throughout the strikes.

Tram lines 2, 5, 6 and 8 are running as normal, while lines 7 and 3b are running all day, but with fewer services than normal.

Line 1 is running rush hour only and 3a is also running a limited service.

The RER lines are still running a limited service and around 60 percent of buses will run.

In the air, despite the threats of January action, there is no disruption set for Friday, while Eurotunnel's Le Shuttle is also running as normal.

Friday is the last day of term for most French schools, so the roads may be busier than usual as French parents start their holiday getaway early, although the majority of people were set to travel over the weekend.

A total of 1.7 million people had booked train tickets for the weekend of December 21st and 22nd, but with SNCF now saying that it can only run half its normal services, at least some of the 850,000 disappointed ticket holders are likely to take to the roads.

And blockades at several sorting offices, as well as sporadic action from some postal workers, has lead to La Poste warning that not all Christmas presents will be delivered in time and some parcels might be arriving on December 26th and 27th instead.