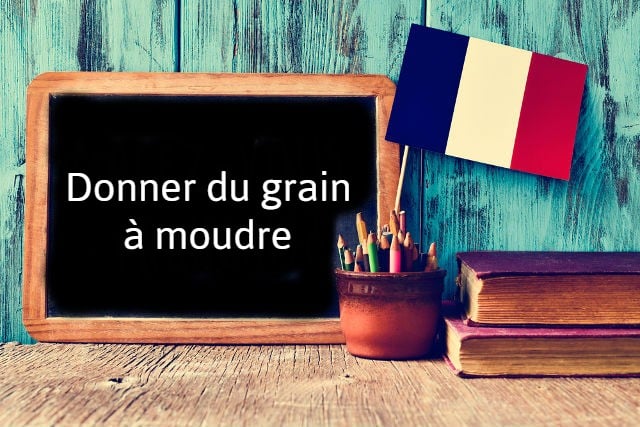 Why do I need to know donner du grain à moudre?

It's an old expression with etymological roots in the very base of French society.

It’s an old expression, dating back to the time when water mills handled the (crucial) job of grinding grain into flour that French people used to make bread.

In order to make bread you need flour, and to make flour you need grain to grind. Donner du grain à moudre, giving grain to grind, is therefore key in ensuring that the mill can do its job. No grain means no bread, which really means removing the base of any French household – maybe even France's society at large (remember, the French revolution started when people ran out of bread).

Over the years, the mills died out, but the expression survived.

It is still popularly used in France today, often in the context of describing the offering of a une marge de manoeuvre – flexibility – in a negotiation process. When used in this sense the expression refers to an act by a that permits a stagnated talk or process to move forward.

So let's say you have two parties that are stuck in a conflict – like a strike that has lasted for weeks – and all of a sudden there is some sort of movement, maybe just a little, but enough to spark hope that the mill might start grinding again soon.

Well if so, il y a du grain à moudre – there is grain to grind.

ll y a encore du grain à moudre pour les retraites – there is still grain to grind regarding the pensions, concluded a BFMTV commentator after a minor breakthrough in government talks.

A French expression that means the same is apporter de l’eau au moulin – to bring water to the mill.

Du grain à moudre can also mean ‘food for thought’. There is actually a France Culture show called Du  Grain à moudre that aims to tell the “news in a way that you might not yet imagined (..), far from the fake quarrels and sterile controversies.”