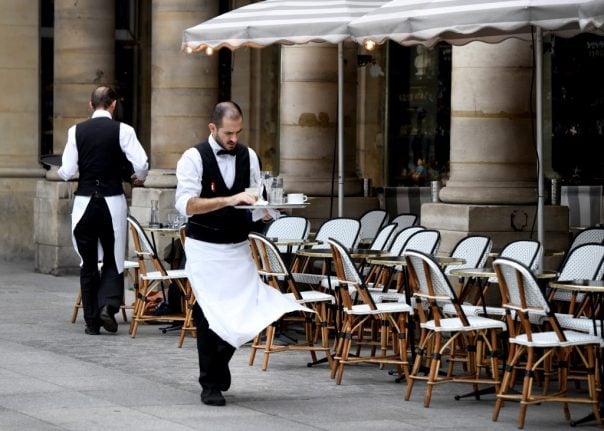 Business owners are calling for a pause in terrace fees. Photo: AFP

“Normally we have at least 80 lunch sittings a day, but yesterday we had just 12,” said Join, whose L'Ecritoire restaurant in the 4th arrondissement has seen sales halved since the protest began on December 5th.

Even the terrace, usually crowded with students hanging out where Charles Baudelaire is said to have presented his lyrical masterpiece Les Fleurs du Mal, is empty.

With no end to the strike in sight, Paris restaurants are at the forefront of businesses facing another bleak Christmas, a year after violent “yellow vest” demonstrations in the capital drove away locals and tourists alike. December is usually peak time for shops and restaurants in Paris. Photo: AFP

“In the mornings people are stressed out trying to get to work on time, at lunchtime few people go out, and at night they rush to get home,” Join said – he himself has had to replace one of his two cooks who lives outside the city and could not find a way in.

On the other side of the Seine, Le Mesturet, a bistrot popular with office workers near the Opera, posted a joke on its Twitter account about the vanished trains, saying “it's better to laugh than cry” about seeing half as many clients as usual.

Trade groups have sounded the alarm, with the UMIH hospitality union calling on Wednesday for a moratorium on terrace fees that cafés and restaurants pay the city.

“It's catastrophic,” said Join. “Chain restaurants have bigger profits and can hold out for a month or two, but not independents.”

Franck Delvau, co-president of the UMIH, confirmed that many Paris restaurants had reported revenue drops of 50 to 60 percent from a year earlier – when sales were already suffering from the “yellow vest” disruptions.

“Once people finally make it home after a day of misery, they don't want to go back out again,” he said.

The Procos retailers' federation said that revenues at Paris businesses overall were down 25 to 30 percent last week because of the strike.

France's CDCF commerce board said businesses in other cities have been less impacted since residents often have cars and are less reliant on public transport.

The government has already moved to alleviate the pain, accelerating the reimbursement of tax credits and allowing businesses to delay some tax payments – the same measures used during the height of the “yellow vest” protests.

Junior Economy Minister Agnes Pannier-Runacher on Friday urged people to patronise local businesses during the crucial holiday season, saying “it's time to give them a hand”.

READ ALSO Will there be any French train services running at Christmas? After a day battling with crowded and sketchy transport services, most Parisians are choosing to stay at home. Photo: AFP

With Paris Metro lines closed or providing only a handful of trains each day, and streets swollen with traffic jams, tourists were finding it hard to get to famed eateries or the hottest new arrivals on the Paris food scene.

Outside the Bouillon Chartier, the Belle Epoque institution that eschews reservations, the usual line to get in is much shorter than normal this week.

Debora Orosco, 30, visiting from Mexico with a friend, was checking out snails in garlic and parsley sauce and other classics on the menu posted outside.

“Some friends told us this is a great place to eat,” she told AFP.

“But the truth is that we came because it's close to where we're staying… The strike makes it a lot longer to get from one side of the city to the other,” she said, smiling as a white-aproned waiter ushered them in to an empty table.