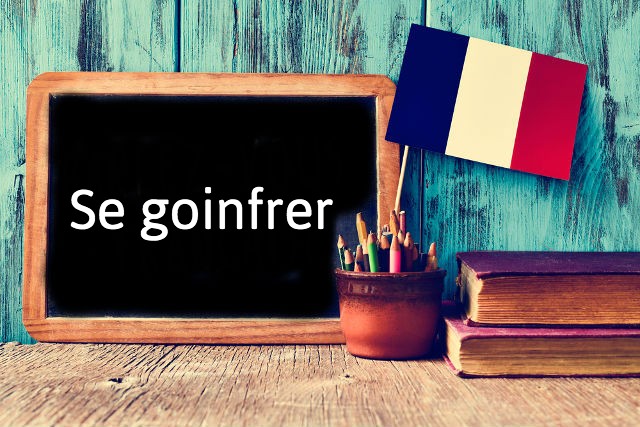 Why do I need to know se goinfrer?

Because it’s that time of the year..

Se goinfrer is a French way of saying that one is stuffing oneself with food. It can literally be translated to manger salement et voracement, ‘eating voraciously like a pig’. At the same time the expression implies that the food being stuffed is delicious. La goinfrerie refers to the process of devouring food with great appetite.

So, if there's anytime to use se goinfrer, it's during the Christmas holidays – perhaps the only time of the year when pigging out is encouraged.

Another very common French term that means nearly the same is gourmand/gourmandise.

There is however a subtle difference between la gourmandise and la goinfrerie, dating back to the 18th century in France. While gourmandise is regarded as a quality, a virtue even, gonfrerie is not. A gourmand loves good food and eats it with delight, but not in a piggish manner. And, as we've seen, the piggishness is implied in se goinfrer.

If someone calls you a gourmand during Christmas, wear the label proudly! In a country that prides itself with its culinary exquisiteness, being a gourmand is proof you're one of them. But it someone tells you to ne pas trop te goinfrer du foie gras – to goo a little less heavy on the foie gras, it might be wise to chew a little slower.

Gloutonnerie is another word for gonfrerie, which also – unlike gourmandise –  implies some sort of pigging out

You can also use se bâfrer or s’empiffrer, which both mean ‘to stuff oneself’ or ‘to guzzle’.

In addition to the verb se goinfrer, goinfre is also a noun. Manger comme un goinfre means ‘to eat like a pig’