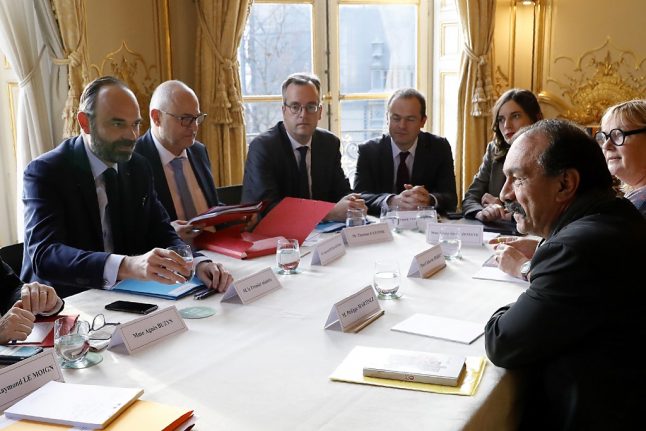 After hundreds of thousands of people took to the streets on Tuesday, both sides stood firm ahead of a series of meetings, with government officials having said they are ready to negotiate.

Union leaders have vowed to continue their action into the new year as the government defended its plan to forge the country's 42 pension schemes into a single points-based system.

On Wednesday the leaders of the main unions held meetings with the French Prime Minister Edouard Philippe    and ministers in Paris with both sides hoping the other would be prepared to back down.

On leaving the meeting the head of the UNSA union Laurent Escure said he was “not totally reassured” by what the PM said and his members remained “determined”.

While Philippe Martinez, the leader of the hardline CGT union accused President Emmanuel Macron of “not listening to the people on the streets”.

After talks with the PM Martinez reiterated his demand that the reform be scrapped and the current pensions system renegotiated.

He said the government would make announcements on Thursday.

There was perhaps a sign of hope for the unions, who began their strikes on December 5th, earlier on Wednesday when the president's office said that Macron was “willing to improve” some elements, although he was determined to carry on with the reform of the pensions system.

The official in the presidency said on condition of anonymity that the president was even considering  “an improvement concerning the pivot age” of 64.

The so-called pivot age is a controversial part of the pension reform because if introduced it would mean many workers would only be able to retire on a full pension at the age of 64. They could still retire at the current legal age of 62 but would face a reduced pension.

Unions, including the more moderate CFDT, have described it as a red line.

At a meeting late Tuesday, four unions including the CGT decided to continue their action, which has wreaked havoc on public transport in Paris and other cities, hobbled regional and international trains, and grounded planes on some strike days.

The unions urged their members to take “local actions” throughout the Christmas holidays, and vowed there would be no letup unless the reform plan is withdrawn.

Ecology Minister Elisabeth Borne condemned  on Wednesday what she described as “reprehensible” electricity cuts and road blockades, saying five clinics and a fire station were left without power in Lyon on Tuesday.

Those responsible “will obviously be prosecuted,” she said.

Strike organisers are hoping for a repeat of 1995, when the government to back down on pension reform after three weeks of metro and rail stoppages just before Christmas.

Commuters in Paris and other big cities have borne the brunt of the transport stoppages so far, but holiday travel plans are now at risk.`

About 62 percent of respondents to an opinion poll for the RTL broadcaster said they support the strike but 69 percent said they wanted a Christmas “truce”.

Businesses are already feeling the impact, with industry associations reporting turnover losses of 30 to 60 percent from a year earlier, in a period that is usually the busiest of the year.

The strike is costing the economy about €400 million a day, according to a calculation by the CPME confederation of small and midsize enterprises.