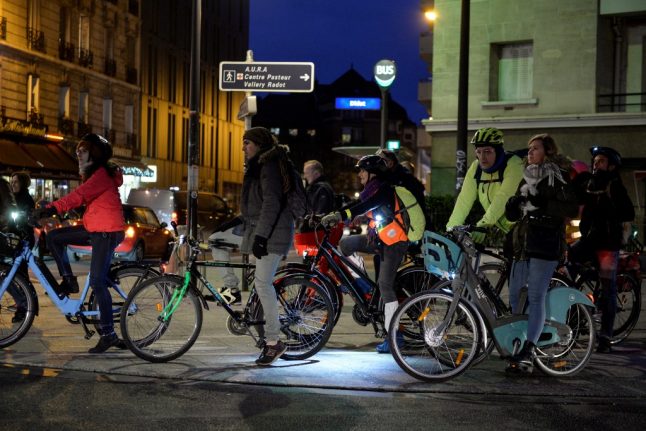 The city's firefighter brigades, the first responders in case of emergencies, have noted a nearly 40 percent surge in accidents since the public transport strike began on December 5th.

“We been called out 600 times between December 5th and December 14th, up from 450 in the same period last year, it's a big jump,” Lieutenant-Colonel Gabriel Plus, the brigade's spokesman, told AFP on Tuesday.

READ ALSO VIDEO Riding on the pavement, blocking cyclists – the tweets that show why Parsians are fed up with scooter riders

“Obviously it's because of the strikes, there is a lot more traffic and inexperienced or poorly equipped people are using bikes or other alternatives,” he said.

The novice two-wheelers are colliding with pedestrians but also being struck by cars, Plus said, though most are suffering only minor injuries that do not require hospital visits.

But the gridlock that has also brought thousands more drivers onto the roads means that firefighters are taking longer to respond to accidents.

“Fortunately we haven't had to make any major interventions, like for a big fire,” Plus said.

Day 13 of Metro strikes in Paris and there are more and more people on bikes. “ç'est la jungle ici,” said one cyclist at this busy junction in the 10th. France Info reported a 40 percent rise in accidents involving cyclists in Paris since the strikes began. #17decembre2019 pic.twitter.com/UGBjcwIftY

Tuesday marked the 13th day of the strike, which has kept half or more of the city's metro lines completely shut and severely crimped service on suburban rail lines.

Since last year, Paris has been flooded with at least 15,000 electric scooters available for rent, drawing the ire of residents and city officials complaining they are cluttering up already crowded sidewalks and squares.

During the first day of the strike on December 5th, the environmental activist group Extinction Rebellion claimed the sabotage of 3,600 electric scooters in Paris and other French cities, saying the green image of the gadgets hid an “ecologically catastrophic” reality.