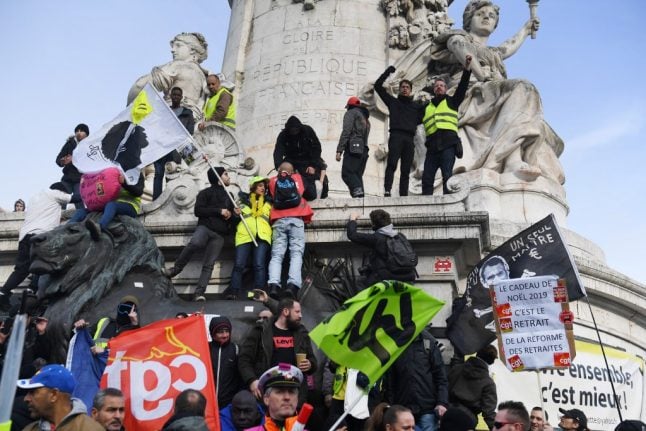 In Paris, workers, unions and their supporters gathered for a fourth mass protest rally against the government's plans to reform the French pension system and The Local spoke to some of the strikers about how they are managing.

The strikes began on December 5th and many people – particularly transport workers – have been on strike ever since.

READ ALSO EXPLAINED What are France's special pensions regimes and why are people striking to protect them? French workers are not paid during strikes and with Christmas approaching many said they were experiencing financial difficulties – but added that they were determined to carry on.

Unions fear that the government's proposed reforms will see French people working longer and for smaller pensions, although the government says the new system will be more fair to everyone.

It wants to replace the current highly complicated system of 42 different pension regimes with one universal system and do away with the 'special regimes' that allow some people – predominantly in the public sector – to retire early.

Two of the main unions participating in the strike, the CFDT and the CGT, are keeping to one side of the square each. While the CFDT wants a universal pension reform (“just not this one”), the CGT wants the French government to scrap the current suggestion and start anew. pic.twitter.com/ie1bD9QKkd

Kamal, 42, is an SNCF employee who has been on strike since December 5th.
A father of two, he admitted that things have been tough for his family.
He told The Local: “Every day we go on strike, we are putting ourselves in a precarious financial situation.
“I was ready to strike until December 11th or 12th, no more. I didn't know it was going to last so long.
“But too bad, I'm making a sacrifice.
“The children don't fully understand, they told me last night that the railway workers are bad, that it's our fault that the country is blocked.
“I explained that it's the government blocked by us. The little one doesn't understand the social and political issues.
“We didn't want to go on strike at Christmas, it was the government who pushed us to do it. They are the ones who control the schedule.
“Often other people support us, people encourage us. We haven't experienced any insults while we've been striking. Everyone's involved, it's not just a strike for us.
“Screw it, we're going all in – Operation Kamikaze.”
READ ALSO Striking in France: What are the rules and do strikers get paid? A fellow SNCF worker known as Snoop, 37, added: “We don't have a choice. If we give in now we will have lost everything.”
The two were among thousands of people who took to the streets of Paris on Tuesday to show their determination.

Snoop, 37, and Kamel, 42, work at the SNCF. They’ve been striking since day 1 (December 5th). “It’s hard,” Kamal said. “Yesterday my daughter called me evil. She’d seen on the news that all the rail workers were mean and ruining Christmas for everyone.” pic.twitter.com/AMESHLl45i

Eight unions were represented and for the first time the CFDT – France's largest union and also considered one of the most moderate – joined the protests.
Union leaders say they were joining the more radical unions like the CGT on the streets because for them, last week's announced by Prime Minister Edouard Philippe about a 'pivot age' of 64 “crossed a red line”.
President Emmanuel Macron had made it a campaign promise that France's legal retirement age of 62 will not be touched.
But among the detailed proposals unveiled for the first time last week was the idea of a 'pivot age' of 64, when the full pension kicks in.
So people would still be able to retire aged 62, but they would get a smaller pension than their colleague who has worked for another two years.
Among the workers who have been involved in all-out strikes since December 5th are employees of RATP, the Paris public transport network.

Edgar Stemer is the General Secretary of all that is transport in the @CFDT. “Including the RATP. It’s our fault that Paris is blocked,” he said. #greve17decembre 2/3 pic.twitter.com/abPwaFtImy

RATP worker Okan said: “It’s really difficult. There will surely be less Christmas gifts under the tree this year. We’ll consume less.”
Striking workers do not get paid, but unions often run a cagnotte (collection) for donations from the public to give to striking workers.
But Okan said the RATP cagnotte is paying out just €16 a day to strikers.
Teachers have also joined the strikes, fearful that a change to pension calculations will see them losing out, but most teachers have been holding a series of one-day walk-outs rather than the unlimited strike action of the transport workers.
Teachers Véronique and Brigitte are both close to retirement and worried about their pensions.
Veronique said: “My kids won’t get any gifts this Christmas. It’s really hard, we’re losing a days' worth of salary every time we strike.
“We’ll see how long we can keep this going. Right now we need to really take it day by day.”
Brigitte added: “I feel like people are understanding our situation.
“Our pupils are very sympathetic, and it seems like their parents are too. At least with this strike the media has started telling the truth about the realities of being a teacher in France. Which is really hard.”
But it's not just the strikers themselves who are facing financial difficulties, many businesses in Paris have been hurt by the drop in trade and in tourism during the strikes.
Christelle, owner of a restaurant next to the Place de la Republique where Tuesday's demo began said: “I’m losing 70 percent of my revenue during the strikes.
“Everyone cancels their reservations. No one wants to walk here after a day of walking or hassle in the Metro to get to work.
“People have no energy to go out for dinner or grab a beer anymore.
“We have been here for 30 years. We survived the 1995 strikes and we will survive this one too, but in 1995 it lasted three weeks. This time it seems they’re going to keep it going for much longer.
“I don’t approve at all of the strikers. These are 17 percent of the population who are ruining it for everyone else.
“Block the government if you like, but don’t block the country like this. You’re making it hard for all the poor people who are trying to make a honest living for themselves.
“Paris isn’t made up just of rich people. There are a lot of poor banlieusards here who are struggling to get by.
“These are the ones who are hurt by the strikes.”