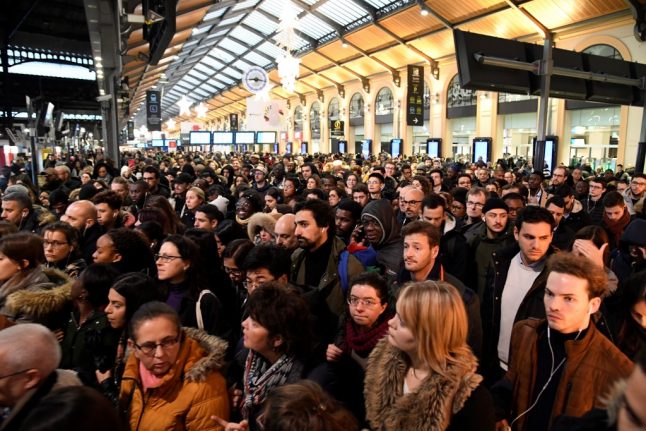 For day-by-day updates on the situation on France's transport network, visit our strikes section.

Unions are calling for a day of all-out protest with demonstrations in the major cities on Tuesday, December 17th in their continuing battle with the government over pension reform.

Flights have been running normally for several days now, but Tuesday will see more services cancelled, albeit fewer than in the early days of the strike.

When the strike started on December 5th, French airspace controllers asked all airlines to cancel 20 percent of their flights.

On Tuesday, only Paris Orly airport is hit with cancellations – with 20 percent of its flights cancelled. However other French airports could see delays in takeoff and landing, and anyone who has a flight booked is advised to check with their airline.

On the railways there is again severe disruption, with fewer trains running than in recent days as more train drivers and SNCF staff follow the call to join protests.

On the tram network no lines are running a full service, but five lines – Lines 2, 5, 6, 7 and 8 – are running all day, albeit with fewer services than normal.

The remaining tram lines are running a limited service either during rush hour only – for Lines 1 and 3a – or between the hours of 12 noon and 3pm for Line 3b.

On the RER suburban trains there is still only a limited service at rush hour only and around 30 percent of the usual bus services will be running. There will also be protests in Paris which bring with them the possibility of trouble from 'black bloc' rioters who have in the past attached themselves to union lead protests.

Heads up: tomorrow Tuesday Dec17 a big protest is expected from République to Bastille to Nation.
Hereunder is the route of the March, from 11:30am until 6pm.
I strongly advise visitors to stay clear of the area (big crowds, lots of police, possibly some tension). pic.twitter.com/QS2LGrizlO

Unions representing rail workers and teachers will be leading the march in Paris, accompanied for the first time by the moderate union CFDT.

The CFDT decided to join the demos after, according to CFDT leader Laurent Berger, Prime Minister Edouard Philippe “crossed a red line” in his speech last Wednesday when he set a new “pivot” retirement age at 64.

In Paris, the march is planned to leave from Place de la République at 1.30pm. The protesters will cross the Bastille square, then take Rue de Lyon and Avenue Daumesnil before ending up at Nation, in the far east of the city.

The Paris police have ordered all stores and cafés on this route to close.

Unions are concerned at proposed reforms to the French pension system, which they say will leave people working longer for less money.

The government insists that its proposals to create a single 'universal' pension system for everyone will be fairer and more transparent and will benefit women who take time out of the workplace and anyone whose current pension is very low.

On Monday, the conflict was complicated further by the resignation of Jean-Paul Delevoye, appointed by President Emmanuel Macron to oversee the pension reform, over a scandal about undeclared private sector payments while he was earning a government salary.

The government has vowed to press on with the reforms regardless, and says Delevoye will be replaced soon.