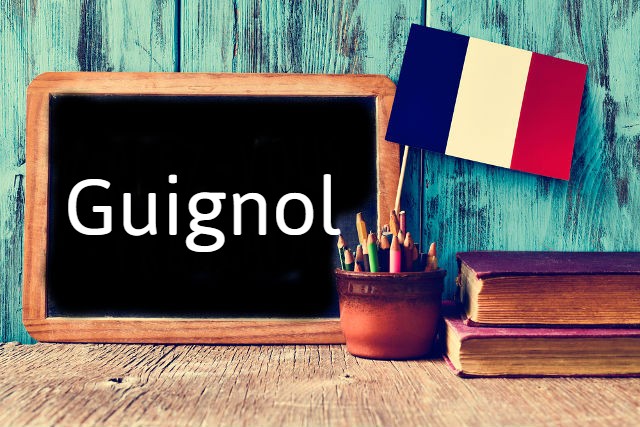 Why do I need to know guignol?

Learn guignol and you will seriously impress people with your in-depth knowledge French culture, politics and society. Seriously, it doesn't really get much mire French than this.

If you tap the word guignol into Google Translate, the search engine suggests “the bloodthirsty chief character in a French puppet show of that name that is similar to Punch and Judy.”

It's not too far out. Punch and Judy is a popular British puppet show that first appeared in 1662 and, in the centuries to follow, gained international fame for its fearless political incorrectness.

Guignol, which really means 'puppet' or 'marionette', is most popularly associated with Les Guignols, a French modern version of Punch and Judy. For the 30 years the show aired (from 1988 until 2018), the puppets featuring in Les Guignols had a tremendous impact on French popular culture, ridiculing politicians and famous personalities in a way only dolls can.

The satirical TV show immortalised itself through iconic displays of several French Presidents. Jacques Chirac, a frequent puppet-guest, sometimes turned into the character Super-Menteur, ‘Super-Liar’, whose superpower was the ability to utter unbelievable lies without getting caught. The term guignol was popularised through the show and today it's often used to state that someone is a “fool,” “idiot” or “clown.”

French people may mutter quel guignol ! – what a clown! at the TV, when listening to a politician they dislike.

You can also use it when talking to or about someone:

Papa fait toujours le guignol, et parfois il se fait mal. Dad is always clowning around. Sometimes so much so that he hurts himself.