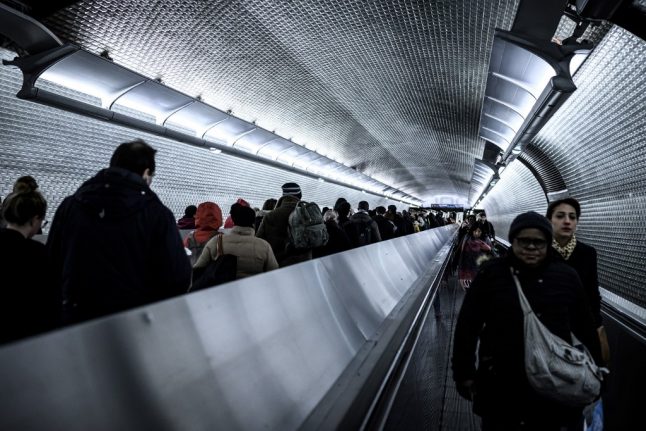 In Paris, Metro, tram and RER services have been reduced to a bare minimum, and getting to work has been a daily battle for many.

This means that many of the 4.1 million Parisians who take the Metro daily have had to find other means of getting to work, as even those services that are still running are extremely crowded.

And with a calm acceptance and an 'esprit de grève' (strike spirit) many have adapted their daily routines with 4am starts, sleeping at work or even in one case walking 30km home after work.

Alain, 55, made headlines after he told French TV station BFMTV that he walked 30km to get from his job in the 15th arrondissement of Paris to his house in the suburb of Yvelines in the evenings.

Alain works as a cleaner and starts at 6.30am every morning. He has been able to catch the night-bus to work, but the return proved more complicated as the regular trains weren’t running.

“I’d obviously not come to work if I had to do the same route by foot in the morning too,” he said.

Others in the same situation as Alain who are less fond of walking found alternative ways to get to work during the strikes.

The Local was told by a parent that some staff at their daughter's creche in the 10th arrondissement had slept on the premises in order to be able to stay open during the strikes.

There have also been stories of hideous taxi journeys and eye-watering prices of trips in a Paris cab, like the tale of the woman from the southern Paris suburb of Antony who wanted to go to the theatre.

She spent three hours in the taxi and missed the show. We can only imagine how much she paid to sit in the back of a cab for that long.

The chaos on the public transport networks has meant many are taking to bikes, scooters and motorbikes to get around the city.

Thomas, a shopkeeper in the 9th arrondissement said that he the strikes didn’t pose any difficulties to him as he was riding his motorcycle to work.

But Sophie, a student in Paris, she said it took her twice the time it usually does on a bicycle, because the cycle lanes were so full.

Since the strikes started the number of people cycling to work in Paris has rocketed, with some bicycle lanes seeing a tripling of the number of cyclists using them every day.

On Tuesday, the City of Paris declared an “all-time-record” of cyclists.

Another record broken last week was the length of car-queues trying to enter the capital. On Monday, commuters driving to work were trapped for hours in queues measuring 600 km – an all-time-record.

Carpool is a system operated by private companies, such as Uber and Hitch, enabling different users heading in the same direction to share a ride. Although it increases the travelling time, it also substantially lessens the fare.

Fabien, a tax controller, is meeting with his colleagues to share a ride to work.

“I still have to wake up earlier and walk more than usual. It probably adds up 45 minutes to my daily journeys,” he said.

Whereas Jérémy, a customer care agent, told The Local he relied on the services of ridesharing companies to get back home at night. “It still takes me an extra hour,” he said.

Some Parisians are still sticking with the little public transport that is still left, sometimes opting for the bus when the Metro isn’t available.

“I go to bed and wake up earlier because I have to take another route to get to work,” said Thierry, a purchase manager who lives and works in Paris.

“It takes me up to one hour more, but it also enables to avoid the crowd,” he added.

In some cases this technique requires flexibility from both the employer and the employee.

Christine for instance, who works in a notaire's office, has to wake up at 4am to be at work at 6am so that she can dodge the traffic congestion. Her employer has allowed her to change her normal working hours and also agreed to pay her parking expenses during the strikes.

Finally, some have been able to work from home.

“I live in zone 5, so it is easier to work remotely,” said Mélodie, a business analyst.

Some even found it very pleasant, like Delphine for example who said she had been able to “wake up later”.

However, this option is not available for everyone.

Gilbert, also a consultant, was able to work remotely last week but had to return to his office on Monday. “My job does not enable me to work from home in the long run,” he said.