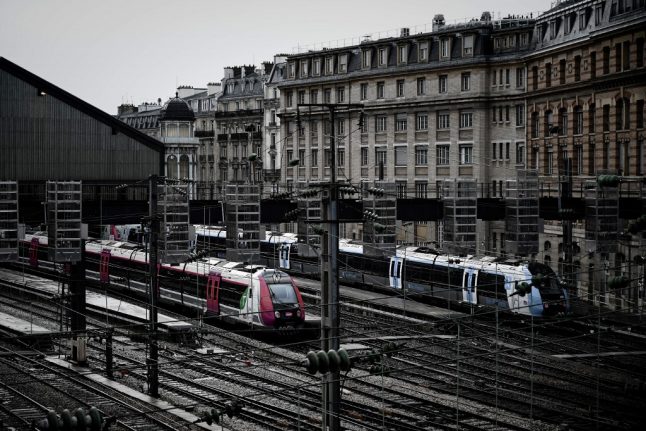 The city's RATP network has said it will be following the same pattern as last weekend – when it sacrificed weekend services in order to concentrate its resources on keeping as many commuter lines as possible open during the week.

The strike over pension reform shows few signs of being speedily resolved as both unions and government reiterate their positions. For the government the reform is necessary to create a simpler, universal system that is fairer for everyone.

But unions fear that the changes will leave people working for longer with smaller pensions once they do retire.

In Paris, unions on the RATP network have already confirmed that they will be striking at least until Wednesday, December 18th.

Services on the city's Metro, bus, tram and RER network expanded slightly on Friday, but are set to fall again over the weekend.

Transport bosses have said that their priority is run as many commuter services as possible, and so weekend services will be sacrificed. Anyone who can avoid Metro and RER services over the weekend is advised to do so.

On Sunday, only the two automated Metro lines – Line 1 and Line 14 – will be functioning normally, as was the case on Saturday. All the other fourteen metro lines will be closed throughout the day.

On the RER only suburban train line B will be running, between 12 noon and 6pm with a limited service. Around 60 percent of the normal bus service will be running. The RER A line is closed. RATP has been warning people not to use the public transport network unless absolutely essential.

On the railways the situation will be similar – with slightly fewer services than had been running on Saturday.

On Sunday, there will be 25 percent of the usual services running on the high speed TGV and Ouigo networks. The Intercité will only manage 13 percent, and the Transilien suburban services just one in five as again bosses try to save their resources for commuters.

The worst affected will be the local TER network will have just one in three services running, many of those involving replacement bus services.

SNCF has, however, reopened its online booking system, which had been closed since the strike began because of the uncertainty of the situation. It is now accepting bookings until December 18th on a limited number of services. More information is available here.

Bear in mind that the disruption continues to affect international rail operators like Eurostar, Thalys nd Lyria, all of which continue to operate limited services.

The Channel Tunnel, which does not run on the French railway network, is not affected.

Flights are still looking OK, and there is no disruption forecast.

On the roads there are still blockades at four of France's oil depots, but the other four are now clear and fuel is getting through. There are still some shortages at petrol stations though, especially in the north west of the country, so check out this interactive map if you are planning a journey.

Next week strikes look to continue, with unions calling for another 'day of protest' on Tuesday, December 17th with further one-day walk-outs and marches and demonstrations in the streets.