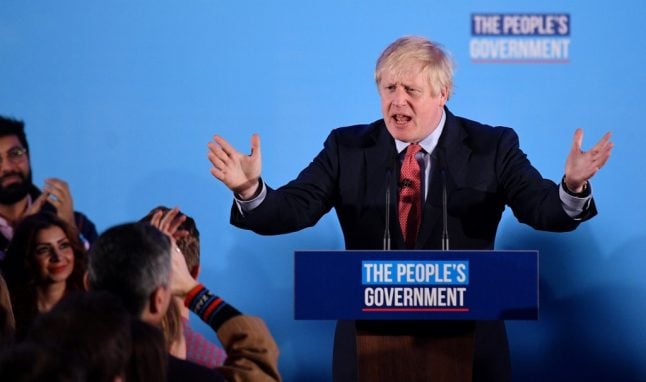 The victorious prime minister insisted on Friday he would do everything to get Brexit done by January 31st 2020.

Brexit he said was now the “irrefutable, irresistible, unarguable will of the British people”.

There will be many Britons in France who might still dispute that but most seemed to accept on Friday, some for the first time, that the UK will leave the EU and they would no longer be European citizens.

READ ALSO What does the Withdrawal Agreement mean for British people in France? British people in France have been in limbo for more than three years over their future rights. Photo: AFP

Many Brits in France took to social media groups to express sadness, shock and anger that the UK, or at least England and Wales, had effectively voted for Brexit once again.

Their reactions echoed those that followed the shock 2016 referendum result.

“It's a devastating morning for all of us – we know that people are shocked and angry and hurting, as we are ourselves after three and a half years of campaigning,” Kalba Meadows from France Rights and British in Europe told The Local.

“Yesterday there was still a glimmer of hope that we might remain in the EU; today that's gone – it's a true Friday the 13th. So today is a day to mourn and take stock.”

But Meadows and others who have been sticking up for the rights of Britons in France and Europe have stressed there is at least something positive to take from Boris Johnson's win.

Much of the uncertainty that has blighted the lives of many and impacted the health of some will soon come to an end, although granted not all.

“There is some not-so-bad news too – our future rights will now be protected by the Withdrawal Agreement, and we no longer have the spectre of a no deal Brexit that has kept us up at night for so long,” she said.

“It's not perfect – we lose our voting rights and our right to free movement for example – but it's lifetime protection of the majority of the rights we have now, and it'll stand even if the government doesn't reach a trade deal with the EU.

“And of course there will be no change for us until the end of the transition period.

“We'd expect the French government now to begin the process of planning the implementation of the Withdrawal Agreement.”

Justine Wallington from the campaign group Remain in France Together also suggested that there was a plus side to the “unpleasant shock” of the result.

“We mourn the imminent loss of our European citizenship, however, with respect to citizens' rights for those who are already resident before any cut off date (probably end of 2020), we face an improved situation compared to last October.

“Previously, current residents were facing a “no-deal” scenario and having to rely on the French Decree and now we are probably looking at the Withdrawal Agreement being agreed. This should secure many of our rights in an international treaty for the rest of our lives.

“Some rights likely to be retained are the S1 medical cover, pension uprating, pension aggregation and more. Some rights we will probably lose – voting rights in local and EU elections in France at the end of January and onward freedom of movement at the end of the transition period.”

That transition period is due to end in December 2020 – just 12 months from now – although it may well be extended despite Boris Johnson having vowed not to.

However future generations who want to move and in France after the transition period have no idea what conditions will be imposed on them. That will all be decided in the coming months and years.

Some UK citizens in France were grateful that they could now at least look forward.

Clive Williams said: “For me personally this gives a way ahead with a withdrawal agreement that should protect my rights having decided to live in France 18 years ago. So now the uncertainty is gone, some bureaucracy is required and I can continue to live in a tolerant, beautiful country.”

Many on The Local's Facebook page and in RIFT's Facebook group spoke of the steps they will now take to secure their future in France, even if meant having to overcome some bureaucratic and linguistic hurdles.

Mary Hartley said: “This is a very sad day for me, I honestly did not believe that it would come to this but that’s made my mind up to go for dual nationality.”

Christine Craik had a similar reaction.

“I'm gutted! But it has made my decision easier to apply for French nationality.“

Andrew Crowe said: “I need to be fluent in French fast to pass the nationality test. My life, family and business are here in France yet if I am not fluent I cannot be a citizen.”

Would be fine if admin here wasn't insoluble. e.g. Need French language exam for RDV to start nationalisation process – pass exam, get RDV in 6 months time when certificate is no longer valid. Applied for “carte de sejour” as back up months ago, still no response from prefecture.

While many Brits spoke of being grateful they were living in France given the Brexit chaos that has engulfed the UK, one reader Thomas Lam was not looking forward to the future.

“I've been living in Reims but I'm from the UK. I am so genuinely disheartened and devastated by the result of the election,” he said.

“I'm moving back home in the next few days, but now I'm not sure if I want to.”