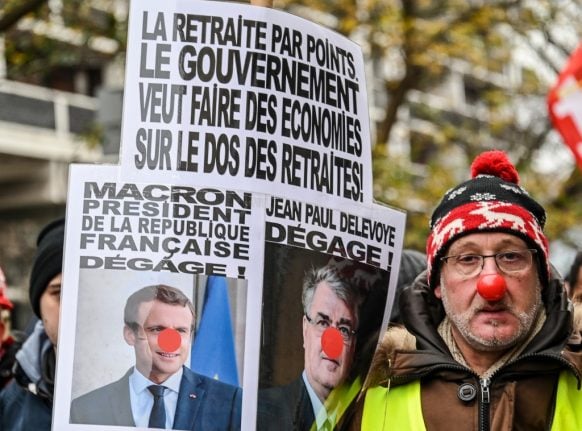 French unions are not impressed with the government's new pension plan and have been taking strike action since last Thursday. Photo: AFP

As French Prime Minister Edouard Philippe wrapped up his long-awaited speech on Wednesday where he unveiled more details of the government's planned pension reform, he said: “this plan justifies putting a stop to the strikes.”

But almost as soon as he had stopped speaking one union after the other expressed their disapproval, calling in unison for a reinforcement of the strikes that began on December 5th.

“Edouard Philippe only repeated what we already knew,” said Yves Lefebvre, the General Secretary of the police union Unité-SGP to BFMTV.

On Friday morning Laurent Brun who represents rail workers with the CGT union warned “there would be no Christmas truce” unless the government backs down and “sees sense”.

“There's a huge determination to go all the way to the end. We prefer a few weeks of chaos rather than a life of misery,” Brun told France Info.

“The strike will continue because the government is digging its heels in so it will go on for a long time,” he added.

Police are among the groups that have been taking strike action to protest the government's plan to overhaul the French pension system, claiming the reform “doesn't recognise the dangers of the profession.”

The speech – where the PM tried to reassure those with physically demanding jobs that they would still benefit from an early pension – did not satisfy them. In the minutes following the speech several police unions called for a 'hardening' of the movement.

LATEST: French pension reform – What changes has the government announced?

Unions representing the transport sector were equally frustrated. Force Ouvrière and CGT Cheminots both called for a “reinforcement of the movement”, and UNSA, which is the main union representing the Paris Metro operator RATP, said the PM’s details “did not measure up to their demands,” calling for an “enlargement” of the movement.

That could mean more transport chaos in the time to come. Leader of the CGT Union Philippe Martinez was not impressed with the French government's new pension proposals. Photo: AFP

Even the CFDT, which until now has been lukewarm in its support of the strikers with only the union's transport branch participating, said the government had “crossed a red line” by making 64 the “pivot age” for pensions.

Philippe had said the current French retirement age of 62 would be kept, but that people choosing to retire before 64 would lose some of the benefits of those who retired at this “pivot age” or after.

The PM’s attempts to reassure teachers, saying that it would be “unacceptable” for them to “lose a single euro of their pension,” also fell flat.

“It's just a lot of words and promises, nothing concrete.” Teachers took to the streets this week to protest the pension reform. Photo: AFP
The government says the current French retirement system is too complex and outdated and wants to introduce a universal system where everybody's pension is calculated in the same way. The new, one-size-fits-all system would ensure that “every euro earned gives the same rights to all French people.”
Unions had previously told The Local that only a complete policy U-turn would suffice if they were to put a stop to the strikes. They fear the proposed points-based system would have negative social and financial consequences for France at large.
French unions: 'We won't stop the strikes until the government caves'
“The government has re-affirmed that they are keeping the points-based system, which means everyone will be working more for less,” said Popineau.
The FSU union will now go into talks with the government, but are getting preparing to reinforce the strikes.
“Tuesday is the next big strike day for teachers,” Popineau said.