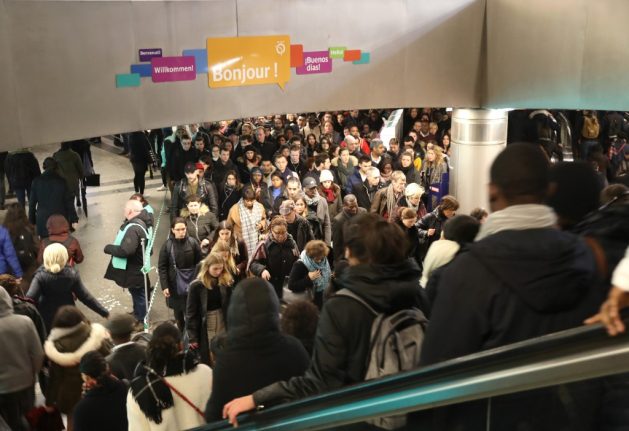 It was hoped that a major announcement by the French government on Wednesday on the full details of its controversial pension proposals would calm the anger of striking unions.

Judging by the reaction from unions on Wednesday evening – calling for 'reinforcements' of the strike action – that might have been a touch optimistic.

READ ALSO Pension concessions will not end French strikes, but they could now run out of steam

Instead unlimited transport strikes enter their eighth day on Thursday with more one-day walk-outs and protests.

On the railways, SNCF is advising people not to travel unless absolutely necessary and around 80 percent of services are cancelled.

Overall around a quarter of the high speed TGV services are running, with roughly one in four trains also running on Intercité and suburban Transilien services.

On the local TER network only 4 in 10 services will be running, and many of those involve replacement bus services.

In Paris workers on the city's RATP network have already announced that their strike is continuing until at least Friday, so services are still very disrupted.

On Thursday, 10 Paris Metro lines are largely closed although in recent days line 11 has been operating a much reduced service at morning rush hour only despite RATP saying it would not be operating.

Although there has been a slight improvement in the Metro, with fewer lines closed completely and some offering limited rush-hour only services, it is still a skeleton service.

Only Metro lines 1 and 14, which operate driverless trains, are running normal services although they have been very crowded during rush hour.

This clip filmed by a commuter at Châtelet on Wednesday shows the extent of the crowding.

Buses, trams and the suburban RER network are also very disrupted. RER B services to Charles de Gaulle and Orly airports are only operating at rush hour and that will be on a reduced service. Passengers travelling to Charles de Gaulle airport from southern Paris will have to change trains at Gare du Nord, which again has been extremely crowded in recent days.

The image below gives you all the information you need about how transport will be affected in Paris on Thursday. In the air there is some good news, as flights are running normally for the second day in a row. There should only be limited knock-on effects by now, but passengers are still advised to check with their airline.

On the roads blockades at oil depots are continuing, although some fuel is still getting through. Several hundred filling stations across the country are either closed or have limited petrol and diesel supplies, however. Click here for an interactive map of the areas affected.

On the streets there will be more demonstrations.

Unions have designated Thursday, December 12th and Tuesday, December 17th as further days of protest, which will involve events in most major cities. Although turnout at the protests has fallen sharply since the first day of the strike on December 5th, marches in the big cities like Paris on Tuesday still saw a turnout in the tens of thousands.

It looks like Paris will be holding several smaller demonstrations and rallies on Thursday, with unions saying they are focusing their efforts on December 17th.

The 'protest day' also raises the possibility of more one-day walk-outs, although one teachers' union said they too were looking to focus their efforts on December 17th, so there shouldn't be too much disruption in the classroom.