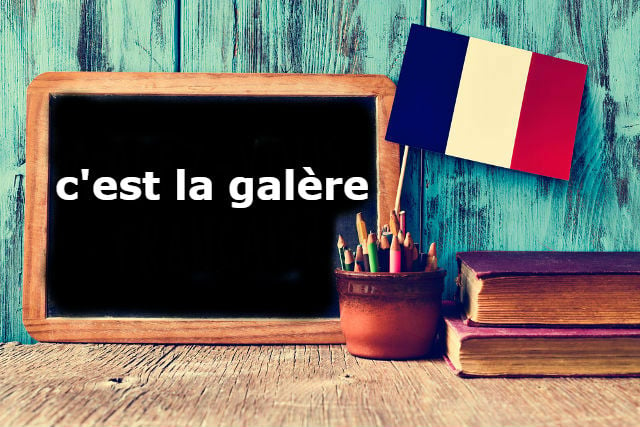 Photo: Deposit photos
Why have we chosen this expression?
This is an expression which is readily used by the French when they've got something to complain about, which, if the cliché is to be believed, happens frequently.
But it's for a certain type of complaint.
It could be long traffic jams, a never-ending search for a decent apartment, an endless cycle of French paperwork or chaotic school transport, as seen in he headline below: “c’est la galère!”.

So, what does it mean?
In an informal situation, galère can be used to mean “hellish”, “difficult” or to describe something as a “chore” or a “pain”.
It comes from the verb galérer which means “to struggle” or “to have a hard time/a lot of hassle”.
The French use C’est la galère as its own expression in an informal setting to describe any ongoing problems they are facing so could be translated as :It's hell, it's a mess, it's a nightmare.
They also use quelle galère!  to mean “what a mess!” or “what a nightmare!”.
And when you're out and about in France, you’ll hear it said out loud when there are problems on the Metro or when there are strikes causing people troubles and it is often used when talking with friends.
Of course, you can change the tense of the verb “être” if you want to talk about issues you’ve already struggled through — “c’était la galère” (“it was hell”) or difficult situation that are coming up — “ça va être la galère” (“it will be a pain”).
Origin
“Galère” is also an old maritime word meaning “galley” — the type of ship that uses oars and sails.
Working on these ships was considered a terrible job because it entailed endless hours of rowing in awful conditions. “La peine des galères” was a punishment that condemned French criminals into forced labour on ships for years on end.
It’s no wonder, then, that “la galère” has come to describe a feeling of endless struggle.
Examples
From the newspaper clipping above:
Transports scolaires: “c'est la galère!”
School transport: “It's hell!”
C'est la galère sur les routes du Val-d'Oise
It's hell on the Val d'Oise roads.
And here are some more examples:
1. On a toujours un long chemin à faire. C’est la galère
We still have a long way to go. What a nightmare.
3. Tous les trains sont annulés. C'est la galère!
All the trains are cancelled. What a mess!
Alternatives
C'est pénible – It's hard/difficult/arduous/gruelling
Or you could use aother informat expression “c'est la bagne” meaning pretty much the same as “c'est le galère”.
And if you want to say “it's a nightmare” you could just say “c'est un cauchemar”.