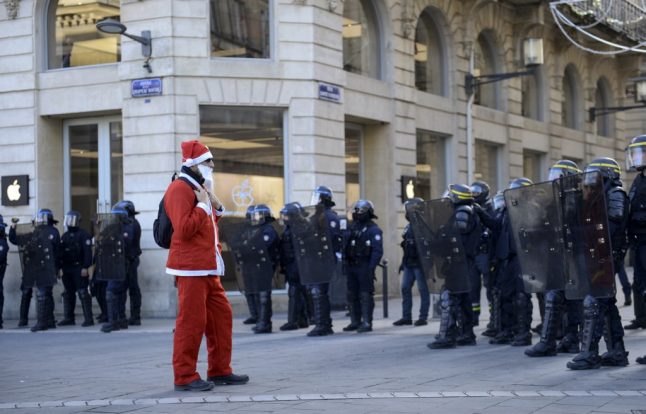 With just two weeks to go until Christmas the strike against the government’s pension reform continues to paralyse most of France’s transport system.

Unions say they are not prepared to back down and Laurent Brun, who represents rail workers with the CGT union, on Wednesday warned “there would be no Christmas truce” unless the government backs down and “sees sense”.

Should the strikes last until New Year, as some have predicted they will, it could have devastating impact on those whose holiday plans involve trains, planes, or even cars.

For one French politician the thought of getting a gridlocked country for Christmas was so outrageous that she called for legislative action to prevent it.

Christelle Morançais, member of the rightwing political party Les Républicains is the president of the midwestern region Pays de la Loire, a part of France that is badly affected by the strikes.

In an interview with RTL Morançais said that the current situation in her region was “unacceptable,” with 25 percent of high speed TGV trains running and 20 percent of local TERs.

“You can’t block a country like this,” she said.

Morançais suggested enforcing an obligatory minimum of 1/3 trains to run as usual during the strikes and to ban the strikes “la veille des vacances scolaires,” 'just before the school holidays'.

The interview caused a storm of reactions. Some praised Morançais for saying what they were thinking, others condemned her for trying to limit the strikers' rights.

“Either we have the right to strike or we don’t,” said Thierry Babec, General Secretary of the Unsa, the main union representing Parisian transport network RATP.

Babec told Le Parisien that he understood if people worried about the impacts of a holiday strike, but that this would not prevent the unions from continuing calling for action.

“It’s a slippery slope. If we forbid strikes just before the holidays, why not forbid them everyday seeing as it’s preventing people from getting to work?” he asked.

But what about the rights of the rest of the country to move? That's the question Morançais rises, saying there are “800,000 strikers versus the remaining 27 million’s right to move around freely.” So whose right should be maintained?
According to Diane Roman, lawyer and professor at the legal faculty of the Paris 1 Sorbonne University, the question regarding whether or not a strike in the public transport sector could be banned is complex, because there are two constitutional principles that needs to be taken into account. “The Constitutional Council made the functioning of public services a constitutional value in 1979,” Roman told Le Parisien.

Public sector strikes can therefore be regulated. In fact, they already are. Both teachers and transport sector workers are subject to stricter strike regulations than the rest of the country at large.

A 2008 law requires that unions and management consult for two weeks before any public transport strike. Employees in the public transport sector are legally obligated to give a 48 hours notice if they intend to join a strike.

READ ALSO: Striking in France – what are the rules and do strikers get paid?

But could regulating public sector strikes go as far as banning them?

No, according to Roman. A complete ban would mean that the value of public functioning would cost workers their constitutional right to strike.

“If a law to ban striking before the holidays were to be voted on, it would need to strike a balance between these two constitutional principles,” she said.

So for anyone planing a trip to France for Christmas, they might have to be banking on the government and the unions reaching some kind of compromise.