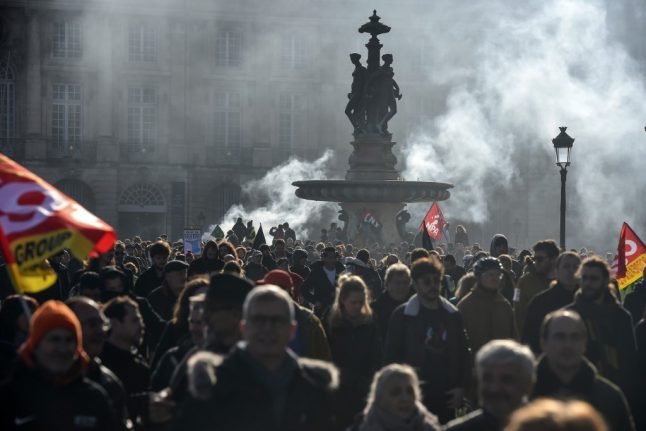 Will the concessions announced be enough to end the transport and other strikes which have disrupted France for the last six days?

To end them immediately… no.

To gradually sap support for the protests among strikers and in wider public opinion… maybe. Union leaders instantly dismissed the proposals as unacceptable or inadequate but representatives of more moderate unions carefully left the door open for further negotiation. All will depend on the reaction at grass-roots meetings in the next 24 hours and observance of the strikes, which already seems to be melting slightly.

Essentially, the government has offered huge concessions on timetable and fine print but none on principle. It hopes to deflate the strikes and claim a great political victory.

The main problem may be the sheer opacity of the reforms finally presented by the Prime Minister Edouard Philippe in a one hour speech today. He was attempting to explain and defend a much misrepresented and misunderstood reform. The complexity of the plan, finally presented after two years of consultation, will lend itself to further distortion.

If you are 44 or over (and due to retire in 2035) there will be no change in the way that your pension is calculated. If you are between 18 and 44, you will enter a new universal pension system in 2025. Young people, now at school, will start work under the new rules from 2022.

Did I say three categories? There would also be even longer grace periods for rail and Paris Metro workers and others on special, gold-plated pension regimes. They will continue to retire in their mid-50s on big pensions until some point in the 2040’s. The exact length of these “transition” periods has been left up for negotiation.

Many might ask what is the point of such a muddled and slow-motion reform.

Mr Philippe rejected, as was inevitable, the demand of the CGT and more militant unions that the pension changes should be abandoned. He pressed ahead with the de facto increase in the retirement age from 62 to 64  – a red-line for more moderate union federations like the CFDT.

It appears that he and Mr Macron were tinkering with the plan until the last moment. Leaks overnight to several French media organisations suggested that even more concessions were likely.

The fall in support for the nationwide day of action on Tuesday – 330,000 protesters nationwide instead of 806,000 last week – may have persuaded Macron that he should hold firm (or firmer).

He wants to avoid another winter of social discontent. But he also needs to hold onto his political base, which has shifted to the right since he was elected in 2017. Having promised to tread where no government has trod successfully before, Macron needs some kind of victory against the unions.

That makes his government’s failure to clarify or defends its ideas over the last two months all the more baffling and culpable. If the Prime Minister had made yesterday’s speech a month ago, or even two weeks ago, it might have been enough to calm the fears of the wider French population.

Under Mr Philippe’s plan, France would eventually have one pension system, instead of 42. (In the, meantime, arguably it would have 43 or more.)

The new system would be based on “points” earned during a working life-time rather than the number of years worked.  The official minimum retirement age (except for rail workers etc) would  remain 62 but there would be topped-up pensions for those who work up to and beyond 64.

Mr Philippe made several concessions. A minimum €1,000 a month pension – a big advance for many farmers, working mums and others – will take effect in 2022, long before the bulk of the new system. (And, coincidentally, just before the next presidential election.)

There will be no attempt to impose cost-savings in the short term (a concession to the CFDT). Teachers are guaranteed no cut in their pensions. They will be given higher wages early in their careers. Lawyers, doctors, nurses and other professions will hold onto the large cash reserves in their own state pension systems. Philippe Martinez of the hardline CGT union has already rejected the proposals, but the more moderate unions may consider them. Photo: AFP

Pensions are an explosive issue in France because, unlike most other EU countries, private pensions scarcely exist. Almost everyone pays into various forms of state pension.

The multi-form system is huge and chaotic. It costs €325bn a year – 14 per cent of France’s GDP. Some people do very badly and end up subsidising those – like rail workers and others – who have sweetheart regimes.

Support for some kind of reform was originally strong. In the absence of clear proposals from the government, a thousand distortions and fibs have thrived. Mr Philippe insisted yesterday that the new system was an attempt to rescue the long-term future of the French pensions model – not to destroy it and open the door to private pensions.

Will he be believed? By the militant unions and the Left, never. They see the pensions battle as a heaven-sent way to restore their support in public opinion.

The more moderate union federations are willing to consider pensions reform but not this reform. They want more concessions from the government. They are driven partly by good sense and partly by their own permanent war for influence and membership with the militant union federations.

France, remember, does not have one TUC but eight of them (at least) with views ranging from the Trostkysist to the Catholic.

All but the most militant unions do finally have to consider public opinion. Opinion polls before Philippe’s speech suggested that just over half French people supported the pensions strikes.

If that dial shifts significantly in the next couple of days, hostilities will not end. But they may be wound down or suspended until next year.