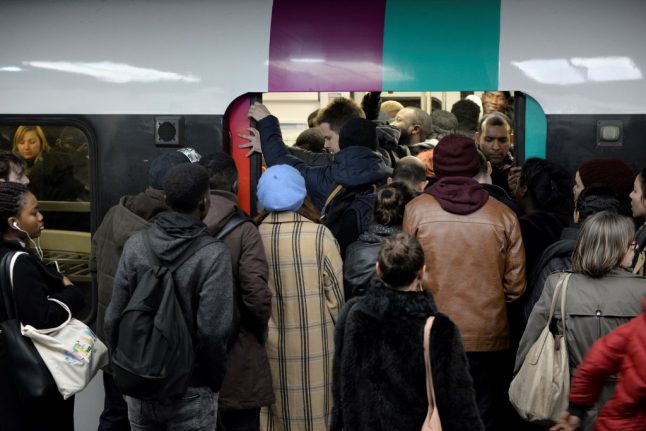 Those who live in central Paris have many different options when public transport isn't running – bikes, scooters or just their own two feet.

At just 9km from east to west Paris is an extremely compact capital, making many places within easy waking distance. And the same goes for tourists in the capital too with many sites within walking distance of each other and their hotels.

READ ALSO Strikes in France: What you need to know about protests and transport disruption on Tuesday But for the many thousands of people who work in Paris but live in its suburbs – often because they have been priced out of Paris' extremely expensive rental or property market – things are not so easy when strike action disrupts public transport.

Many people resort to driving, but with 600km of traffic jams reported in the greater Paris area on Monday this is not a great option.

And for the many who do not have cars there are really only two choices – walk distances of 10km or more twice a day or try to cram onto the few services that are running.

Crowded at the best of times, the scarcity of RER services running to the suburbs produced a terrifying crush at Gare du Nord station on Monday evening as thousands of commuters tried desperately to cram onto one of the few RER train services that were running( see videos below).

Probably the worst affected by the transport strikes are those who live in the further out suburbs of Paris who have no choice but to either walk for two hours or more or rely on the scarce and extremely crowded services that are running https://t.co/PBCDMHZ1WQ

Those who use the RER lines that serve the Paris suburbs will tell you that even at the best of times the carriages are often jam-packed and services are often delayed.

But during a strike all the everyday problems are amplified.

Over the weekend and on Monday transport bosses – fearing safety problems – issued warnings to people not to use the suburban Transilien or RER services unless absolutely necessary.

READ ALSO: It's not Parisians or tourists who are most affected by the ongoing strikes

But for many in the suburbs these services represent their only way of getting to work.

There have been stories this week of staff at a creche in central Paris sleeping on the premises overnight to ensure they can be at work the next day. It had become impossible to make it into work from the suburbs and then home again in the evening.

A woman just stopped me in the street in the 10th arrondissement and asked the way to Creteil in the Paris suburbs (via Bastille). She's only got a 13km / 2h 49 minute walk home becase the Metro is closed due to strikes. She was stoic. Not fussed. #grevedu5decembre pic.twitter.com/cPR4npofEy

Given the suburbs are home many of the Paris region's poorer areas – indeed the département of Seine-Saint-Denis on the outskirts of Paris is the poorest département in France – many residents don't have the kind of jobs that can be done remotely from home. They simply have to be on site.

There are some efforts being made to address the transport situation for those in the suburbs in the long term.

Arguably the biggest transport project in Europe is underway known as Grand Paris Express which will see Metro lines extended into the suburbs as well as new ones built. And the new lines will be automated with driverless trains so won't be as badly affected by strikes.

There will be 200km of new rail tracks and 68 new stations in the suburbs around Paris. The mammoth project won't be completely finished however until 2030. Commuters in the suburbs will have to hope the strikes end before then.

In the meantime perhaps of more use will be the creation of the creation of the 'RER Vélo' a network of cycle paths leading from Paris to the suburbs to enable more people to cycle to work, but with work still ongoing on many paths it might not be a viable option for many at the moment.